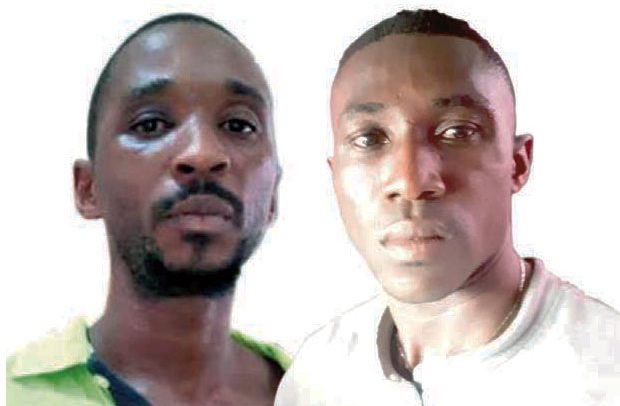 The prosecution in the trial of two Nigerians, Samuel Udoetuk Wills and John Oji, in connection with the kidnapping and subsequent murder of four girls in Takoradi in the Western Region has closed its case.

The cross examination of the 23rd and the last  prosecution witness in the Takoradi missing girls’ case came to an end on Thursday in a Sekondi High Court.

After the over two hours cross examination of Detective Chief Inspector Dorcas Asare, counsel for the second accused, Mark Bosia stood up and wanted to make a submission of no case for Oji.

He said considering what had happened with respect to Oji, he should be acquitted and discharged since there was no evidence to incriminate him in the case.

However, the trial judge, Justice Richard Adjei-Frimpong, asked him to file a written submission of no case for the prosecution to also respond.

The judge then called the lawyers for accused persons and the Chief State Attorney, Patience Klinogo, for a brief conference.

After that the judge explained to the court and the seven-member jury that looking at the ‘voluminous’ nature of the various exhibits and the number of prosecution witnesses in the case he had to give some ample time for Oji’s lawyer to file his case and for the prosecution to respond.

He, therefore, asked the lawyer to file his written submission of no case on December 8, 2020 and also told the prosecution to submit their response on December 22, 2020.

He then set January 28, 2021 as the day the court would rule on whether to acquit and discharge Oji or ask him to open his defence.

The judge reminded the jury of the oath they had taken and the need to be guided by it during the break.

He, however, added that the ruling on the submission of no case would be done in the absence of the jury.

The jury requested that the court should arrange so that the members, the defence lawyers, the Chief State Attorney and the judge himself could visit where the first suspect, Wills, used to stay and some of the crime scenes.

The judge declined the request and explained that some of the witnesses had already described how the residence of the suspect looked like and that videos of the crime scenes had also been shown in court.

The judge asked Detective Chief Inspector, Dorcas Asare, how many languages the investigation revealed Wills and Oji had been speaking.

She said Oji also spoke Nigeria language, English language and Fante but not as fluent as that of first accused.

During the cross examination earlier, lawyer for Wills, George Esiful-Ansah, asked Detective Chief Inspector Asare whether she knew that Priscilla Mantebea Koranchie, one of the victims was a friend of Wills.

The lawyer even added that the two used to meet at a joint where the mother of a friend of the victim called Esther Opoong sold ‘Waakye’.

Detective Chief Inspector Asare said it was true they used to meet at the ‘Waakye’ joint in front of Phastor Company Limited.

The lawyer wanted to know why the investigator did not put Wills under the categories of friends of the victim after realizing that the suspect and the victim were friends,

The investigator told the court that even though the two were friends, “Wills kidnapped the girl.”

She said after suspect Wills was arrested and Priscilla Mantebea Koranchie’s picture was shown to him and asked how he came by the picture, the suspect denied knowing her.