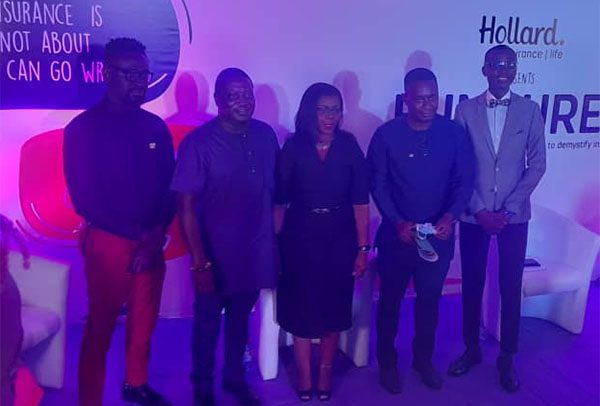 Bernard Avle (far right) and other panelists at the event

GOVERNMENT HAS been advised to ensure that all public properties including government vehicles are insured.

A broadcast journalist, Bernard Avle, who gave the advice, was speaking as a panel member during a forum organised by Hollard Ghana Friday in Accra on the topic, “Media and Insurance: Making Insurance a Ghanaian Lifestyle.”

The former Ghana Journalists Association (GJA) Journalist of the Year was of the view that insurance, as a social service being provided by the private sector, should be a priority of government as it cushioned citizens against uncertainties that could active labour force become a burden to the state.

Making reference to the recent fire outbreak at Makola market, he said: “If your people don’t have insurance, they will not be able to pay their children’s school fees. When their goods get burnt, children will drop out of school, people will die young and the country doesn’t move forward.”

“They should stop treating insurance with this lip service and lackadaisical attitude where police will not pay insurance and then who should pay.” he queried.

Nr Avle also called on government to work on policies that would substantially see a rise in income levels of citizens which to serve as a push factor for people to go for insurance.

“The more complex an economy becomes, the more the need for insurance and so we all have to work for the economy to grow not just in terms of revenue coming in but in terms of quality of economic activities” he said.

Dzifa Bampoh, a broadcast journalist with Media General, also observed that government vehicles tend to wreck most havoc on accident victims who are made to bear the trauma and  cost of accidents alone without any support.

Head of Supervision at the National Insurance Commission (NIC), Seth Eshun, disclosed that government as the biggest employer in the country, has through NIC been operating on a tangent of getting all properties insured.

That, he said, was captured in the new Insurance Act that was passed in 2021, against a previous law that only made it compulsory for only private commercial properties to be insured.

Out of 2.7 million cars registered by Drivers Vehicle and Licensinģ Authority (DVLA), only 1.3 million were insured. Of these, Government fleet made up most of the uninsured vehicles.

He added that discussions were far advanced with stakeholders within the education sector to make insurance part of Ghana’s school curriculum to educate the youth on the benefits of insurance at an early stage.