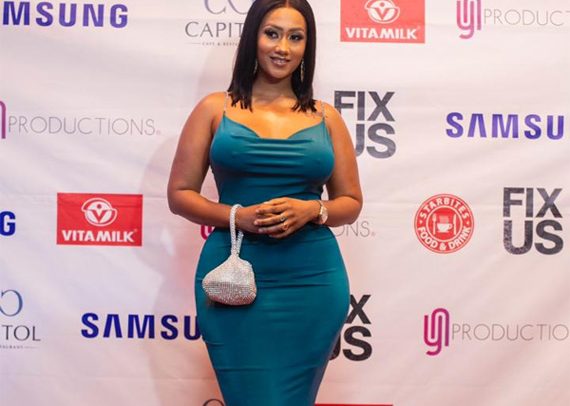 Hajia4real flashed her nipples as she went braless in a racy gown to the premiere of the ‘Fix Us’ movie on Friday night.

The Ghanaian socialite, born Mona Faiz Montrage, put on a jaw-dropping display as she wowed in a skintight muted turquoise dress at the movie event which attracted a large number of movie fans to the Silverbird Cinemas in Accra.

She looked sensational while she also showcased her body contours to the cameras on the red carpet.

Her braless fabric was clung to her nipples, and that didn’t go unnoticed.

She played the role of a saucy girl directly starring alongside Prince David Osei and Ivorian actress Alexandra Amon in the movie.

Many cinemas goers commended her performance in the movie.

“If you never try, you’ll never know your capabilities. It was so amazing watching myself on the screens at the just-ended movie premier #FIXUS,” she said after the Friday’s premiere event.

Hajia4real is known for making controversial headlines over her activities on social circles, but in the last few months, she has gradually been turning the tides for big career gains.

She recently launched a business shop, and now her acting career is picking up steam.