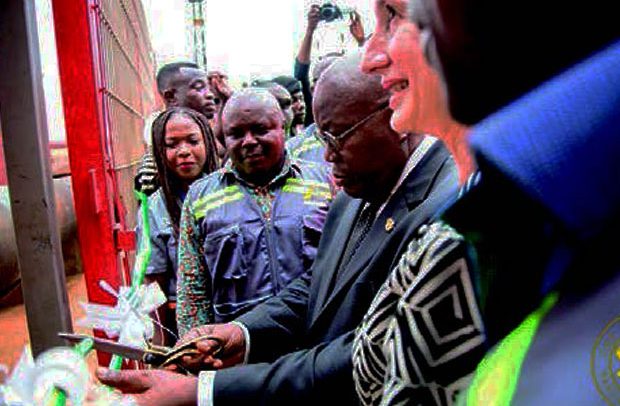 President Nana Addo Dankwa Akufo-Addo has stated categorically that the provision of sustainable energy to power industry is one of the priorities of his government.

He said the government would continue to work hard with all stakeholders to provide sufficient energy to meet the demands of the country and never return to the ‘dumsor’ days.

The 470 megawatts (MW) Karpowership was originally stationed in Tema in the Greater Region by the previous National Democratic Congress (NDC) government but it was decommissioned and relocated to the Sekondi Naval Base in order to utilize natural gas from the facility of Ghana Gas at Atuabo.

While in Tema, the Karpowership was utilizing heavy fuel which cost the country millions of dollars monthly.

The NPP government then took the decision to relocate the Karpowership to Sekondi in order to utilize natural gas from the Ghana Gas Company which is relatively cheaper to ensure uninterrupted power supply in the country.

The power ship arrived at the anchorage of the Home Port of the Western Naval Command on Thursday, August 15, 2019.

The President mentioned that with the utilization of gas from Sankofa Fields, hundreds of millions of dollars would be saved which would inure to the benefit of the country.

According to the President, the negotiated agreement with the Turkish company had resulted in mutually beneficial outcomes for both Ghana and Turkey.

“The Karpowership Ghana Company Limited is now providing a total of 450 MW of power to feed into the national grid for 10 years,” the President added.

He noted that the development agenda of the government was not reversible and that the right measures would be put in place for the overall benefits of the country.

The President said that in spite of the fact that government would ensure constant power supply, Ghanaians should still find ways to conserve energy.

“So on advice, I authorized the Ministry of Energy to purchase 12 energy efficient bulbs which are now in and will be distributed across the country,” he disclosed.

The Minister of Energy, Peter Amewu, noted that the uninterrupted power during the relocation process of the Karpowership was as a result of good energy management systems put in place, in collaboration with the various agencies in the energy sector.

The Managing Director of Karpowership, Volkan Buyukbicter, commended government for its commitment in ensuring the availability of reliable energy at a relative cheaper cost.