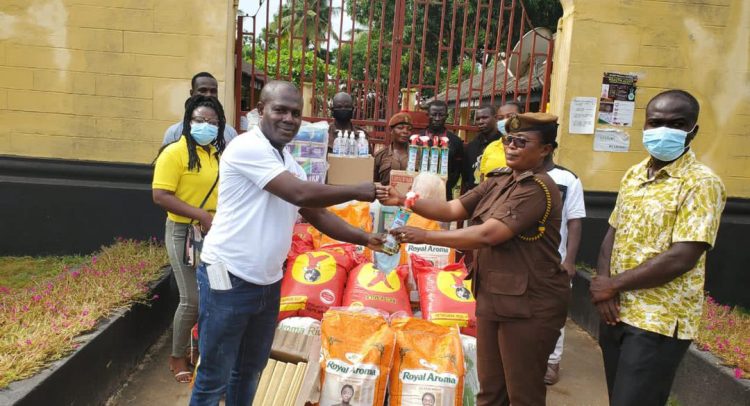 The Hand on Heart Foundation, a Non-Governmental Organization has put a smile on the faces of inmates at the Communicable Disease Centre of the Ankaful Maximum Prison in the Central Region.

The NGO on Sunday May 23, donated items to the male and female inmates at the facility.

The items included 10 bags of rice, 5 bags of gari, 5 bags of maize, 2 boxes of key soap, 5 gallons of liquid soap, loafs of bread, 4 boxes of hand sanitizers among others.

This forms part of the foundation’s social responsibility to restrict inmates of various prisons out of deplorable conditions.

Presenting the items, the President and Founder of the Foundation, Mr. Thomas Kirk-Mensah noted that Hand on Heart Foundation is aimed at supporting the needy in the communities and to create public awareness.

The donation, according to him, falls within the Foundation’s objective of empowering the public especially prisoners no matter where they find themselves.

He believes when Traditional Authorities, corporate bodies, Government Agencies, Ministries, various embassies, Religious bodies come together to help to better the needs of society and humanity, the world would be a better place.

He asked the inmates not to despair because God was still interested in them and further advised them to keep their spirit afloat and stand up to shine, adding that the Lord would make them rise above their weaknesses.

The donation was supported by Faith Assemblies of God church at Buade Nungua, and staff and management of the Labianca Company Limited.

Receiving the items, Chaplain of the facility, Mr. Paige expressed gratitude for the gesture and appealed to society to come to the aid of the prisons.

About Hand On Heart Foundation

Hand on Heart Foundation is a non-profit organization incorporated in Ghana by the Company Acts in the year 2013. It is a commission mandated in helping the marginalized and stigmatized inmates by the community because of their experiences. Hand on Heart believe the Kingdom of men is set to empower these prison inmates to rightly and properly integrate into their families and the entire society. It is a pure humanitarian organization.