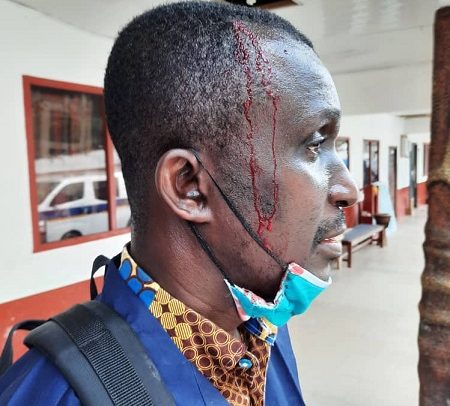 Principal of Bright Senior High School at Akyem – Kukurantumi in the Abuakwa North Municipality of the Eastern Region Bright Amponsah, allegedly incited the final year students to attack the WAEC officials supervising the ongoing examinations in his school on Thursday.

The final year candidates Thursday morning clashed with invigilators at Bright SHS after the Principal allegedly incited the students to chase them for being strict for preventing them from engaging them in exams malpractices.

DGN Online gathered that the Principal allegedly collected money and bought ‘Apor’ and grades for the students every year but this time around the “Apor’ failed making the paper very difficult for them to write.

The angry students as learned since the commencement of the exams have been complaining to the School authorities bitterly about how the external invigilators deployed to the school supervising the examination have been very strict disallowing them to even go out to urinate.

The students say the situation is affecting them psychologically hence unable to write the exams, which forced the headmaster, Bright Amponsah to storm the school and asked the final year students to come out and attack the WAEC officials.

The WAEC officials namely; David Nii Djanmensah, Jerry Okine, Jacob Adikor, Emmanuel Asare, and a journalist with the Daily Graphic in Koforidua, Damalie Emmanuel Pacome who went to the school to verify the situation were beaten to a pulp by school guards and students.
Before the earlier attacks, the some of the students on Thursday morning went berserk after the Social Studies paper and deflated the car tyre of an invigilator identified as Acheampong in charge of a car with registration number AS 1471 -X.

Mr. Acheampong who is a registration officer in the ongoing voters registration abandoned his invigilation post.

The aggrieved students who rushed out holding knives, cutlasses, sticks and stones chased the journalist who was in the school to verify reports of attacks on invigilators by the students.

The angry students accosted and seized his mobile phone in the school.

The students claimed they have paid GHC6000 bribes each and won’t allow anybody to stop them from failing the exams, hence they would beat anyone up when they stormed the school.

The Daily Graphic Reporter sensing danger took to his heels for safety but was pursued for about 15 minutes by the mob students from the school towards the Kukurantumi township.

Some of the students jumped on a motorbike to cross the journalist on the way and hit him several times with sticks, seized his bag, and attempted to lynch him but a commercial driver rescued him.

The Journalist who was visibly injured with cuts on the face and parts of his body has since lodged an official report at the Kukurantumi Police station where he has been issued with Police Medical forms for treatment at the Community Hospital at Akyem Kukurantumi.

The students alleged that the deployment of many invigilators to their schools has political undertones.

They claimed it is an attempt by the government to make private schools unattractive to discourage patronage by students not happy with the quality of Education in Public Schools.

Meanwhile, the Police are yet to make some arrest at the time of filing this report.