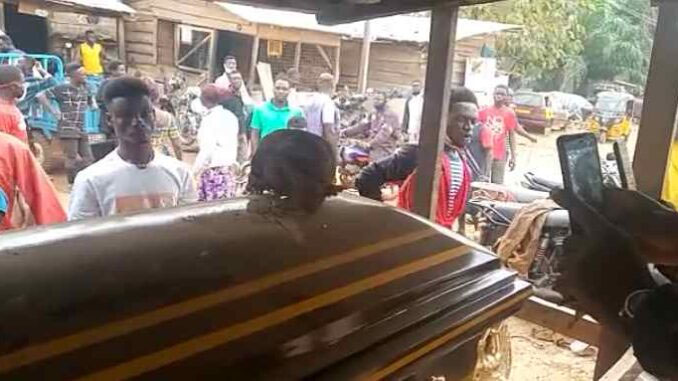 A human skull has been found on top of a coffin at a carpentry shop in Mim, Ahafo region of Ghana.

According to the shop owner, Kwaku Kwakye, he had a phone call from a friend to make haste to the shop and see a skull placed on top of one of his coffins.

“ I found a human skull with hairs on it, suspected to be a female head. I immediately reported the matter to the chiefs, elders and police in my area”, he narrated.

He said earlier this week, a similar coffin was stolen from my shop and dumped at the Mim cemetery, saying, the person might have used it for rituals, so I had to pacify my shop and burn the first coffin at the cemetery thinking such incidence won’t happen again.

Mr. Kwakye said he has spent so much money through the pacification process performed by the Mim traditional council.

“ though I am a firm Christian in the Apostolic Church, I had to perform the basic rituals to avert any calamity likely to befall the town and my family,” he said.

The police are yet to identify the culprit.