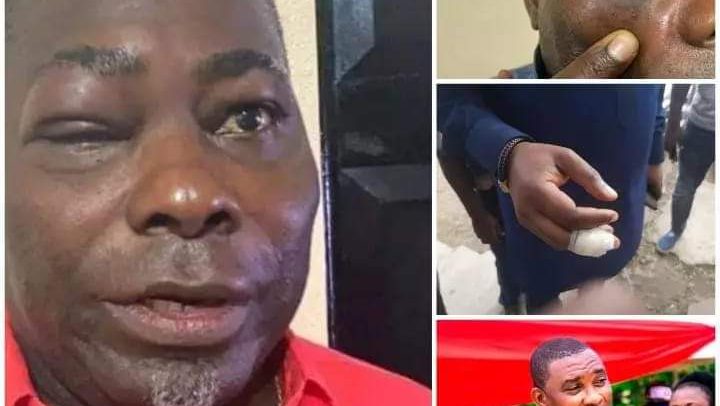 A presidential staffer, Charles Bissue, has denied media reports suggesting that he physically attacked and bite the fingers of
MP for Tarkwa-Nsuaem Constituency, Mireku Duker.

According to him, the reports by Daily Guide and Daily Dispatch are false.

In a statement, he stated that he was never the aggressor as have been reported.

He, however, refrained from going into details on the matter in the interest of NPP.

Below is his statement

The reportage is a gross misrepresentation of what transpired at the Party’s meeting on Monday, I wish to assure all that I neither physically attacked nor bit the finger of the MP for Tarkwa-Nsuaem Constituency, Hon. Mireku Duker as widely reported. I was not the aggressor in this situation, as it is not in my nature, as anyone who knows me could attest.

I am by this medium assuring all and sundry that, I will rather resort to the structures in the NPP to resolve this matter amicably. Much as I would like to publicize my side of the unfortunate incident, I am guided by the fact that the NPP has an election to prosecute and anything that distracts from the telling of the unparalleled achievements of this government will be a great disservice to the country and the Party that I have faithfully served. I am guided, as always, not by self-interest but by greater ideals and loyalties, and a firm belief that justice serves those who serve others, and that truth and honesty always prevails.

The NPP’s Constitution, Article 3, Sections 5A, 1-5 (Duties of a member) stipulates that:

5. A member shall have the right and duty at all times to:

i. promote and defend the good name of the Party;

ii. protect the unity of the Party;

iii. be loyal and truthful to the Party;

iv. abide by and publicly uphold the decisions of the Party;

v. carry out his or her duties faithfully and with honesty to the best of his or her ability.

In accordance with the stated articles of the NPP Constitution, I’ll allow the party structures to handle the matter accordingly, and I will continue to focus on my work for our party and for our great country, undeterred and with conviction.

In deference to the eminent people who constitute the Grievance and Disciplinary Committee, I will not be issuing any further statement and I trust in the unflinching resolve of the Party to act expeditiously and fairly to all parties involved.