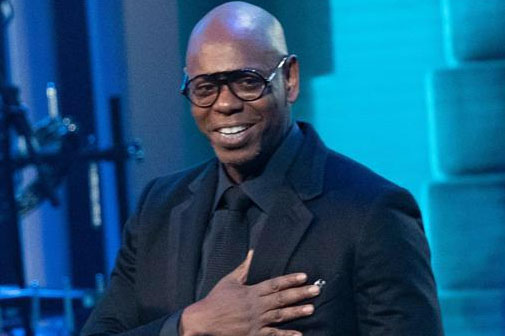 American comedian, Dave Chappelle, has spoken about his quest to relocate to Ghana and spend the rest of his life in the revered West African country.

Speaking with model Naomi Campbell on her podcast, the comedian said his decision was inspired by award-winning Soul singer Steve Wonder who said in an interview recently that he wants to relocate to Ghana permanently.

“Now those in the room that knows Stevie personally he’s said this thing many times through the years that we’ve known him. But this last time he said it, what he said was ‘I am moving to Ghana so that I can be valued and respected more’, that’s almost exactly the phrase he used,” he said.

“He went on to say ‘I’ll do this for my grandchildren…’ which was a very ominous thing to say because clearly, this is gonna last for the foreseeable future and to see him decide to make the move I wanted to go,” he added.

Dave Chappelle said that he believes Stevie Wonder is one of the most valued people in the US, adding that it came as a surprise that ‘Isn’t She Lovely’ singer felt the way he did.

“You gotta think as a black American who amongst us is more valued and respected than Stevie Wonder and the idea that he would feel this way at this stage in his life and career…I think that Stevie is the soul of American culture and if the soul leaves the body then this thing is dead. Then I thought I’ll follow him over there or I’ll go myself. I’ll do it for him.”

Dave Chappelle said he is interested in not only visiting Ghana, but buying some properties and opening a comedy club in the country.

He said he got in touch with Naomi Campbell and Ghanaian British architect David Adjaye to help facilitate his plans.

“We have been working together, hopefully, I’ll build something there but I am definitely going to at least rent something for the foreseeable future, and I hope to open a comedy club there because there’s none,” he said. The comedian hopes to build something that lasts in Ghana.