‘I Will Kill You In The Street’ 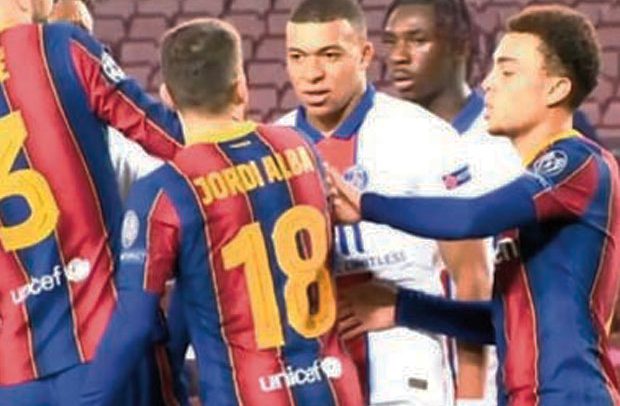 PSG match winner Kylian Mbappe furiously warned Barcelona’s Jordi Alba he would “kill him in the street” during Tuesday’s Champions League tie at the Camp Nou.

Mbappe stole all the headlines by scoring a memorable hat-trick in a 4-1 win for Mauricio Pochettino’s side, putting the Ligue 1 champions firmly in control of the last-16 clash.

But a fiery clash saw the French forward lose his temper with Alba during a PSG set-piece on Tuesday night, with Gerard Pique forced to intervene.

In a conversation picked up by the cameras of TV station, Movistar, on Tuesday when Mbappe told the Barcelona defender, Sergino Dest, to stop touching him at a first-half set-piece, Alba intervened and told the PSG star to “get bigger.”

Centre-back Pique then backed Alba up by saying, “Who are you going to kill?”

Pique was mocked later in the game by social media users after he pulled back Mbappe’s shirt as the young Frenchman threatened to break away for a counter- attack.

The Barcelona defender was mocked for being too slow, with one social media user captioning the photo, “catch me if you can.”

After the game, Mbappe praised his side’s performance, especially as they achieved the memorable Camp Nou victory “in style.”

The forward told RMC Sport on Tuesday night, “Tonight, it was magnificent but we have not won anything yet.

“I am happy. I always want to give the best of myself. I have not always had that success. But never in my life will I hide.”