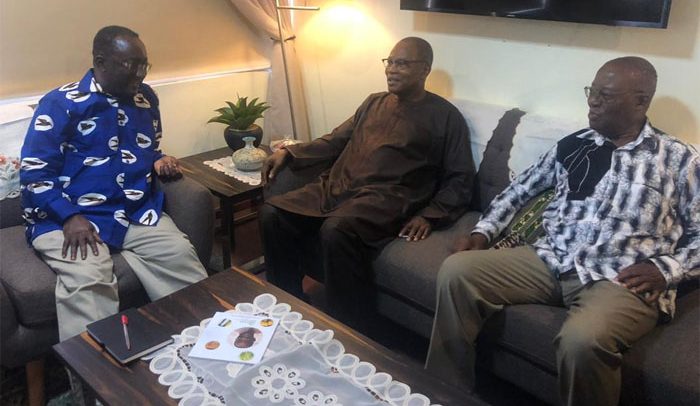 SPECIAL REPRESENTATIVE of the United Nations Secretary-General for West Africa and the Sahel, Dr. Mohamed Ibn Chambas, has urged Ghana to double up its efforts in becoming self-sufficient in rice production.

He has also encouraged the country to adopt the System of Rice Intensification technology which has reportedly helped farmers in countries like Mali to improve their rice yields.

Dr. Ibn Chambas made the call on Wednesday, April 10, 2019, in Accra, when he paid a courtesy call on Minister of Food and Agriculture, Dr. Owusu Afriyie Akoto, at the latter’s office.

Their meeting centered on how West African nations, particularly Ghana could work to reduce their rice import wage bill.

Dr. Afriyie Akoto observed how the high rice importations in West Africa has been a major source of worry for the international community.

Ghana, DGN Online gathered from Dr. Afriyie Akoto, imports an estimated $1.5 billion worth of rice annually, with the Minister lamenting that the development has had adverse effect on the performance of the Ghana cedi.

Dr. Afriyie Akoto expressed the belief that six regions of Ghana including Ashanti, Brong Ahafo, Central, and Western, have the capacity to supply rice for the whole of West Africa.

The Central region alone, the Minister says, according to a research conducted by some Koreans, has the potential of meeting Ghana’s rice needs annually.

So why the imports?

Not much concerted efforts have been made over the years to commercialize rice production in Ghana.

There has also been little efforts in value addition of locally produced rice which makes many rice consumers in Ghana to prefer well polished rice from overseas.

Support for smallholders farmers who constitute the bulk of rice producers in Ghana has also been minimal.

The Government of Ghana about two years ago introduced its flagship agricultural project dubbed: ‘Planting For Food and Jobs.”

But Dr. Ibn Chambas is demanding much more from the Ghanaian Government.

He says the government should help smallholders farmers to achieve high yields in line with the United Nations (UN) Sustainable Development Goals (SDGs).

Dr. Ibn Chambas stressed that smallholders farmers should not be left behind.

He noted that System of Rice Intensification technology has led rapidly to rice self-suffiency in Mali.

Dr. Afriyie Akoto admitted to his guest that Ghana was endowed with more arable land for rice production but was quick to add that unfortunately, the country has not done much to benefit from its endowment.