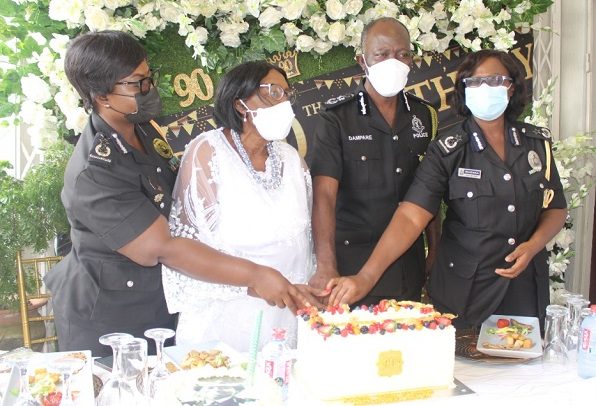 It was all joy when the police administration led by the Acting Inspector General of Police, Dr. George Akuffo Dampare joined family members to celebrate the 90th birthday celebration of Police Woman three (PW3), ACP Rtd Margaret Darkwah, at her Cantonments Residence in Accra.

PW3   Margaret Darkwah was one of the first 12 police women enlisted into the Gold Coast Police Force on September 1, 1952 by Dr. Kwame Nkrumah, then in Charge of Government Business.

She was the first police woman to become Assistant Commissioner of Police (ACP), the highest rank policewomen could attain at the time, and First Female Quartermaster General.

Amidst danceable tunes from Harmonious Chorale, and the Ghana Police Band, the family joined invited guests to thank God for the life of PW3 Margaret Darkwah.

In a word of exhortation, ACP Rev. Frank Twum Baah urged all present to thank God for the 90 years of grace for ACP Rtd Darkwah.

COP (Rtd) Jane Christie Donkor, who gave a brief background of PW3 Margaret Darkwah, said she is from Pramkese in Akim Abuakwa district and enlisted into the Gold Coast Police Force on September 1, 1952, at aged 21 years.

She was a holder of senior Cambridge certificate and worked as a clerical assistant before her enlistment into the Force.

She passed out on December 1, 1952 after three months intensive training and rose through the ranks, and on January 20, 1962, became the first female to attend the Cadet Officers Course at the Police College.

PW3 passed through the ranks and on March 1, 1976, she was promoted to the rank of Assistant Commissioner of Police (ACP), the first female to attain that rank and to become Quartermaser-General.

COP (Rtd) Donkor revealed that PW3 had been featured many times on radio and television programmes.

“On August 1, 1976, she was invited to serve on national committee for Miss World (Ghana) 1967 contest by Abibirim Publishing House Limited on behalf of Flamingo.

“In 1975, the United Nations Human Rights Fellowship nominated her for fellowship award,” she added.

Her daughter, Mary Boakye, recounted how her mother loved her children and the Ghana Police Service.

Kufuor To School Youth About Busia