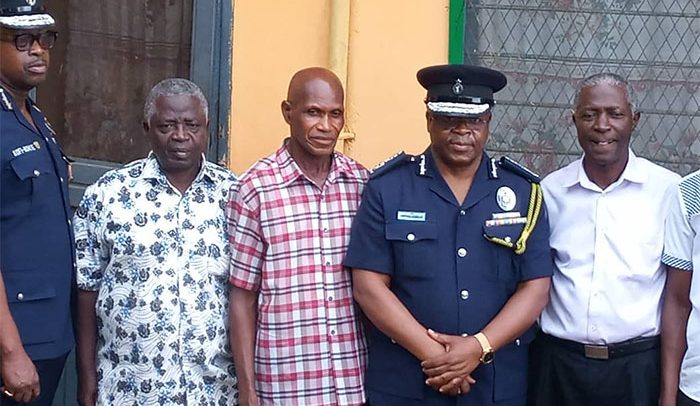 The acting Inspector General of Police (IGP), James Oppong-Boanuh, has given an assurance that the Police Administration will not hesitate to punish police personnel who were negligent in the performance of their duties in the Takoradi kidnapping cases.

“There will be an after action review of the cases to see what went wrong and if there is the need to punish negligence, it will be done,” he indicated.

The IGP and his entourage, including COP Kofi Boakye, a former Western Regional Police Commander,   are in the region to visit the families of the Takoradi kidnapped girls to interact with them. His meeting with the families was held behind closed doors.

However, speaking in an interview with DAILY GUIDE, ACP David Eklu, Director General Public Affairs of Ghana Police Service, explained that a few of the family members had issues concerning the attitude of some police officers in the region towards the case.

“The IGP indicated that for every major operation, there is what we call an after action review and we will look at the role the police played,” he added.

He pointed out that some of the family members commended some police officers for their excellent job.

The IGP also confirmed to the family members that the experts who would be carrying out the DNA tests would arrive in the region the next day.

He, therefore, appealed to the family members to show co-operation during the investigations.

The families who   initially refused the police request for DNA tests to be conducted on their relations agreed to co-operate with the police.

Francis Bentum, father of the first victim, Priscilla Blessing Bentum, told DAILY GUIDE after the meeting that he would submit to the DNA test.

On the jail break by the key suspect Samuel Udoetuk Wills from the Takoradi Police cells, ACP Eklu mentioned that four of the officers on duty had gone through disciplinary proceedings and the report sent to the Police Headquarters.

He pointed out that the report was sent in July this year and was being reviewed for appropriate action.

He also added that the police had appointed a family liaison officer, ACP Rev Fr. George Arthurs, Director of Religious Affairs at the Ghana Police Service, to support the efforts of the Regional Police Command.

“Barring any last minute change, we should begin the process of taking the samples for the DNA test today,” he added.

ACP Eklu appealed passionately to the media to be circumspect on the issue saying “so far the statement we have put out, we didn’t conclude that the remains belonged to the four missing girls.”

He pointed out that the IGP was also in the region to brief the families on the stages of the investigations and elicit their support to get to the bottom of the matter.

The IGP and his men later visited the family members of the alleged fourth victim, Ruth Abakah, at Nsuaem in the Tarkwa-Nsuaem Municipality of the region.

This visit by the IGP comes after officials of the Western Regional Police Command and a team of clinical psychologists and forensic experts from the Police Criminal Investigations Department recently met the families to request DNA samples.

The samples became necessary after police investigating the disappearances of the three girls – Priscilla Blessing Bentum, Ruth Love Quayson and Priscilla Kuranchie – found human parts in the sewage system near the home of Samuel Udoetuk Wills earlier in August.

Nana Jabs Mahama; Where Are The Projects?