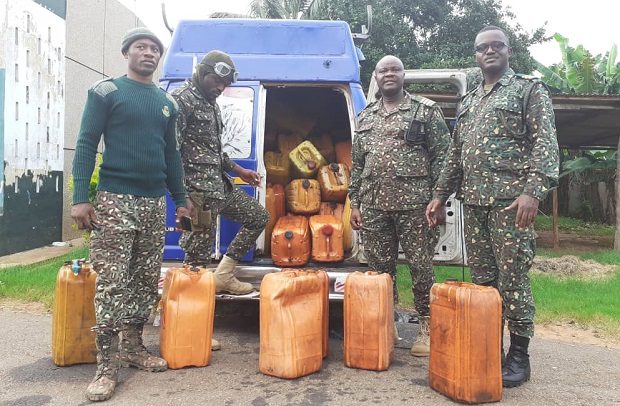 The fuel, the van and some Immigration Officers

The Akanu Sector Command of the Ghana Immigration Service (GIS) has intercepted 150 gallons of fuel being smuggled into the country over the weekend.

The substance which is suspected to be diesel and kept in gallons popularly referred to as “Kufour Gallons” was intercepted along unapproved routes between Zukpe and Gali-Dzafe near the Akanu Joint Border Post in the Ketu North Municipality of the Volta Region.

A three-man patrol team of the GIS intercepted the consignment last Saturday, July 6, 2019 at about 4:30am, the Akanu Sector Commander, Chief Superintendent Attoprah Godson said.

Daily Guide understands that a gallon can take about 25 litres of diesel at GHC5.50p on the legal market and GHC3.80p on the black market per litre.

He explained that acting upon orders from his regional command; he put his men on high alert including patrols. On the dawn of that fateful Saturday, his men intercepted a blue Ford van with registered number AS-4077-U believed to have been smuggled from Lybia through to Nigeria to neighbouring Togo and then to Ghana. From Togo, the suspects who are now at large used unapproved routes till they were arrested.

Inspector Samuel Ampofo who led the team said after arresting a motorbike rider who led to the arrest of the van driver, the two fled into nearby bushes as they were being interrogated. Since he and his colleagues were unarmed, chasing the duo into the hostile and isolated bushes would have been dangerous.

Prior to their escape, the driver who said he had been asked to deliver the consignment to someone in Akatsi admitted he was unfamiliar with the route.

The Volta Regional Commander of the GIS, Peter Cleaver Nantuo Esq also narrated that he had intelligence that “a petroleum product especially from Togolese side was coming into the country so I alerted all my men to intensify patrol especially on unapproved routes and low and behold this was the outcome of the positive efforts of my men”

He observed that “despite the limited logistics, my men are able and capable” and warned persons with the intention of engaging in illegal acts along the frontiers to desist from them. He also called on residents to assist “with volunteering information to us, we will not sell them out because if Ghana is good it is good for us all”.

He also encouraged continuous collaboration between his outfit and other sister security agencies to secure Ghana’s borders and improve the economy. At the time of filing this report, plans were far advanced to handover the van and its content to the Customs Division of the Ghana Revenue Authority (GRA).