Injunction Against Acting AG Struck Out 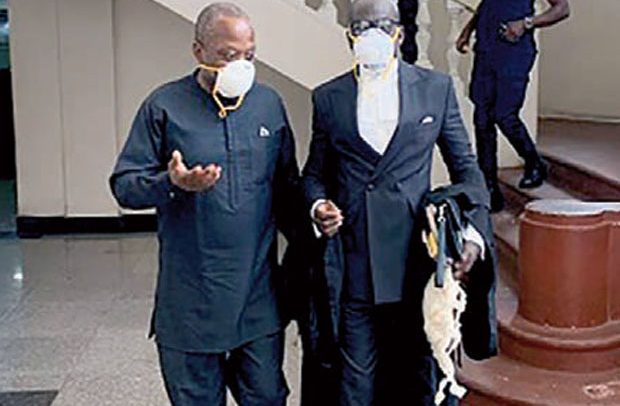 An application for interlocutory injunction to restrain Johnson Akuamoah Asiedu from functioning as the acting Auditor General (AG) has been struck out by the Supreme Court.

This was after lawyer for the plaintiff in a substantive matter challenging the directive by President Akufo-Addo on the AG, Yaw Domelevo, to proceed on his 167 days accumulated leave decided to withdraw the application for interim injunction pending the determination of the case.

The withdrawal was necessitated by the decision of the Supreme Court to strike out the names of Mr. Domelevo and the acting AG, Johnson Akuamoah Asiedu, as defendants.

Main Suit
Prof. Kwaku Asare known in social media circles as Kwaku Azar filed a suit at the Supreme Court seeking to set aside the 167 accumulated leave days of AG Daniel Domelovo which took effect on July 1, 2020.
He is seeking an order that the President’s directive is inconsistent with or is in contravention with the letter and spirit of Article 187(7) (a) of the 1992 Constitution.

He contends that the office of the AG is a very important position which should not be toyed with.
Prof. Asare wants a declaration that except for stated grounds in Article 146 of the 1992 Constitution, the AG’s tenure cannot be disturbed by presidential directives, whether couched as accumulated leave, involuntary leave, suspension, interdiction, temporary removal, disciplinary control, or however styled, and he may remain in office until he attains the compulsory retirement age of 60 years.

Besides, Mr. Dame filed an application asking the court to strike out the AG and Johnson Akuamoah Asiedu as defendants.

A seven-member panel of the court presided over by Justice Jones Dotse and assisted by Justices Paul Baffoe-Bonnie, Yaw Appau, Samuel Marful-Sau, Nene Amegatcher, Mariama Owusu and Lovelace Johnson struck out the names of AG Daniel Yaw Domelevo and acting AG Johnson Akuamoah Asiedu as defendants in the matter.

Eric Alifo, Counsel for the plaintiff, was then asked by the court what he intended to do with the application for injunction now that Mr. Asiedu’s name was struck out as defendant.

He attempted to move the application but the judges reminded him that his action was seeking to challenge an executive order of the President hence he could not seek injunction on the acting AG who is just a beneficiary of the order, and especially when his name had been struck out.

Mr. Alifo then sought leave of the court to withdraw the application and the court struck it out as withdrawn.