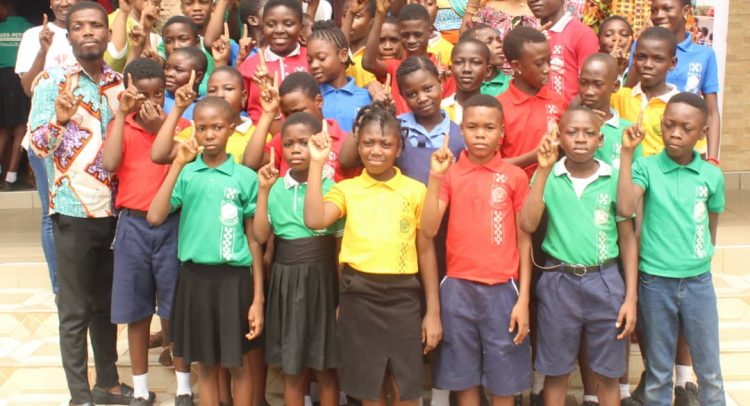 A section of the children and dignitaries in a group photograph

Over 1000 children from the Okaikwie South Constituency have received sensitization on gender based violence and how to guard against falling victim to sexual abuse.

The school children drawn from seven private schools and aged six to 16 years were educated on topics such as incest, defilement, rape, teenage pregnancy, and drug addiction.

The seminar was organized by IRISE Ghana, the local non-governmental organization championing the ‘1 Billion Rising’ campaign against sexual violence.

Deputy Minister of Gender Children and Social Protection, Freda Prempeh, said violence against women and children particularly girls has its routes embedded in cultural practices which have been internalized by society and the family.

The Deputy Minister said violence against children has gained attention and concrete efforts are being made to eradicate its prevalence, saying
“The government will not relent in its efforts to provide empowerment opportunities for women and girls as well as support all structures working in the areas of prevention, prosecution and rehabilitation of survivors of sexual and gender-based violence.

Ending sexual and gender-based violence against women and girls is possible,” she added.

IRISE Ghana Founder and Country Director of ‘1 Billion Rising’, Vickenzie Gifty Ofei, in her opening remarks said the seminar was to create the platform for children to learn about gender based violence in a fun way while answering  questions that might be brothering them.

“Today we are here to talk against injustices that children face every day in society, schools, culture, work and religious places, among other places,” she said.

“One billion Rising is a platform that gives us a voice, We the women and children of Ghana will use this platform to stop all forms of abuse and violence against children.”

Mrs. Ofei said it was time society put an end to the rape, abuse and violence against women and children.

“We implore the government of Ghana to come to our aid to help us fight and win the battle against the abuse of our children,” she said.