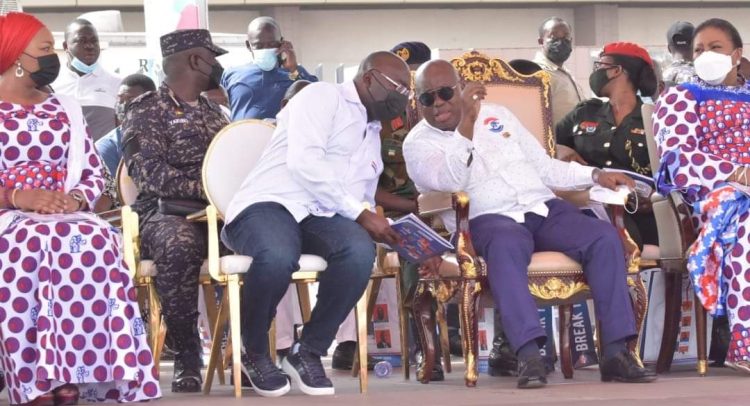 President Akufo-Addo in a tête-à-tête with Dr. Bawumia

It has emerged that it was majority of the Ashanti Region NPP Members of Parliament who composed the accompanying party for Vice President Dr. Mahamudu Bawumia during the climax of this year’s NPP annual National Delegates’ Conference at the Heroes Park in Kumasi on Sunday.

At least 25 of them were said to be involved in organising the massive reception for the Vice President, who is one of the party’s stalwarts lacing their boots to lead the NPP in 2024 to break the eight-year power cycle, when President Akufo-Addo is exiting office.

The historic programme held under the theme “NPP: Our Resolve, Our Determination and Commitment to Ghana’s Development,” was attended by NPP delegates from all the 275 constituencies in the 16 regions of the country, with President Akufo-Addo present.

Dr. Bawumia’s appearance at the venue triggered spontaneous applause which resonated at the grounds.

NPP delegates went into a frenzy again when Vice President Dr. Bawumia was invited to address the conference.

As soon as the MC announced that it was the turn of Dr. Bawumia to address the conference, delegates spontaneously occupied the front of the VIP dais, as they chanted the name of the Vice President.

The number of delegates who had occupied the space kept soaring and security personnel, as well as the MCs had it difficult controlling them and getting them to return to their seats.

The Vice President himself was left stunned by the spontaneous reaction, as he was unable to begin his address due to the cacophonous cheers.

As it proved extremely difficult to control the massive show of support, the Vice President intervened by pleading with the delegates to resume their seats.

Calm eventually returned after several pleas from the MCs, and the Vice President gave his address which highlighted challenges the Akufo-Addo government inherited from the NDC, and how the government has taken steps to address some of the challenges to reduce sufferings of Ghanaians.

The Vice President expressed optimism that the NPP will become the first political party in the Fourth Republic to break the eight-year power cycle.

He said although “breaking the eight will not be easy,” he is very optimistic that “for the first time in our history we’ll break the eight.”

According to him, the NPP has a superior record as compared to the opposition National Democratic Congress (NDC) and has to do things well to remain in government after the 2024 elections when President Akufo-Addo is exiting power.

“I believe if we’re united we shall break the eight. Our success will depend on how we conduct ourselves. We must not take down each other, but rather the NDC whose return will be a disaster for Ghana,” Dr. Bawumia said, adding “The NPP has a solid record of achievement in the Fourth Republic. Our party has become the most important driver of the Ghanaian vision and development agenda. We have been responsible for the most important policies which touch every Ghanaian in every corner of our nation, the NHIS, the school feeding programme, the free antenatal services, the Free SHS, the free TVET programme etc.

“As we meet here today at Conference, we are reminded that it is the party that birthed the government. Thus, strengthening party-government relations is key to our collective success.

“I believe that Insha Allah we will be able to break the eight because our record is a superior record. Whether we are talking about agriculture, industry, roads, housing, education, health, transformational policies like digitalisation, social interventions, and so on the comparison between us and the NDC will be like night and day.”

“It is important to acknowledge that we in the NPP have not solved all the problems facing Ghanaians but we have solved many problems and we have a plan we are working to. After all, we are only in the first year of a four-year mandate which was given to us at the end of last year.

“The COVID-19 pandemic has increased the cost of living virtually everywhere in the world including countries like the US, UK, Germany, Japan, Nigeria, Cote d’Ivoire, etc and Ghana has similarly been affected.

“Nevertheless, it is important to remind ourselves that notwithstanding the global economic adverse impact of the COVID-19 pandemic on economic growth, debts and deficits, at the macroeconomic level, inflation in Ghana today at 12.2% is lower than it was in 2016 (15.4%).

“For the first time in over two decades, the trade balance (the difference between what we export and what we import) recorded a surplus for four consecutive years from 2017-2020.

“Our record of creating jobs (over 750,000 jobs) is vastly superior to the record of the NDC government which froze public service recruitment. So if our performance on the key macroeconomic indicators (inflation, interest rates, depreciation, external reserves, trade balance and jobs) during the worst global pandemic in 100 years is better than your performance without such a pandemic, how can you say your economic management is better?” Dr. Bawumia noted.

He again threw political punches at the NDC saying they are still incompetent even in opposition.

According to him, the NDC are so incompetent that they decided to go to court to contest the 2020 presidential election results without having a single pink sheet to support their case.

The Vice President, in a teasing manner, said unlike the NPP who contested the 2012 election results with over 10,000 pink sheets, the NDC was rather in court only to demand biscuits.

“Interestingly, the NDC went to court only to lament that the Electoral Commission (EC) only served them tea without biscuits,” he said, attracting spontaneous laughter at the Heroes Park in Kumasi.

Dr. Bawumia, still in a teasing mood, said the NPP in 2012 went to court with ample evidence to contest the results of the elections with data which the NPP worked hard to compile in a short time, but same cannot be said about the NDC in 2020.

“In 2012, the NPP presented over 10,000 pink sheets and we told the court that we are using data to contest the results, leading to famous quote ‘You and I were not there’.

“Interestingly, when the court asked the NDC General Secretary, Johnson Asiedu Nketiah, if he has any pink sheets, he said My Lord I have no pink sheets,” he added.

Dr. Bawumia, also said “the 2020 NDC Electoral Petition was fundamentally incompetent,” stressing that the NPP won the 2020 polls genuinely so he was surprised the NDC went to court to contest the results.

According to him, from the onset, the NDC leadership realised that they had lost the elections but they, strangely, continued to peddle blatant lies and indulged in high scale propaganda just to deceive their teeming members.