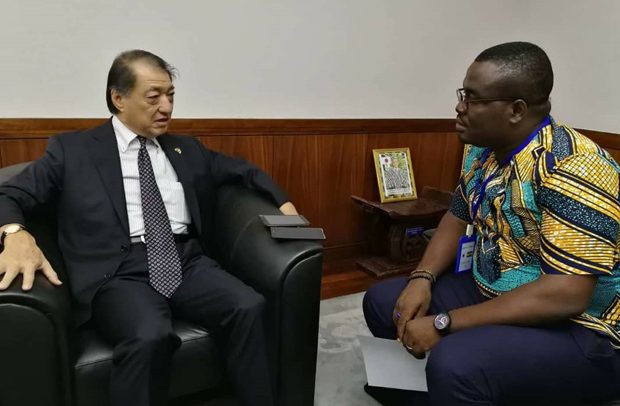 HE Tsutomu Himeno (L) speaking with a journalist

The Japanese Ambassador to Ghana, Tsutomu Himeno, is calling on government and other stakeholders to collaborate with the embassy to promote least financed sports, particularly karate-do, judo and kendo.

His call for the construction of Japanese martial arts stems from values such as discipline, respect, self-defence and confidence.

To the Japanese envoy, the above listed virtues are very crucial to the development of young people in the country.

Speaking ahead of the Japan Week Celebration, an annual occasion designed to celebrate Japan culture, scheduled for today, he commended Ghana for her brilliance in karate and judo.

He, however, stated that Ghana should go the extra mile regarding engaging children in the sports, as well as government’s involvement in providing the right infrastructure for the sport.

“With a proper collaboration between Japan and the government of Ghana, we could construct an ultramodern sports facility specifically for Judo, Karate and Kendo which would go a long way to help promote the sport,” he said.

Mr. Himeno bemoaned the non-availability of space for sports infrastructure as a challenge that could have a telling effect on sports in the country.

He mentioned that the Hathramani Hall at the Accra Sports Stadium used for such disciplines appears not very conducive and overly used.

“These sports are very crucial to the growth of young people and must be encouraged, especially in schools. That could be achieved if stakeholders work together to achieve that purpose,” the Japanese ambassador said.

The Japan Week Celebration begins today with some workshops with the Japanese ambassador’s judo championship scheduled for the Accra Sports Stadium tomorrow.

He added, “We are committed to developing these disciplines in Ghana as the country has great potentials and could excel if the right measures were put in place.”