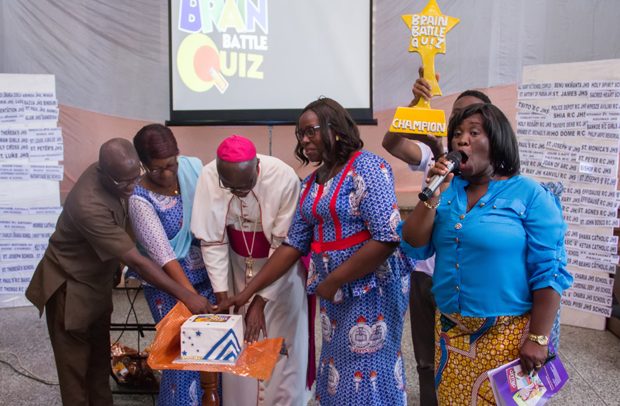 THE NATIONAL Catholic Secretariat in collaboration with Cocktail Media has launched the National Science and Maths Quiz for Catholic basic schools across the nation.

The competition dubbed, the ‘Brain Battle Quiz’ will see pupils from some selected basic schools face off in a mental battle for academic supremacy.

In her address, General Manager of Catholic Schools, Faustina Opoku Yeboah said the quiz is designed to equip the pupils with the requisite knowledge as well as practical skills in Science, Mathematics and Technology.

The program is also designed to equip teachers of Science and Mathematics to ensure maximum output by the pupils.

The belief that men study and work in industrialized institutions while women nurture and keep the home should be a thing of the past, she admonished, urging all parents and teachers to ensure that they encourage more girls to participate in the competition.

Delivering the keynote address, Archbishop of Accra, John Bonaventure Kwofie stated that the quiz does not only seek to educate students but also incite students’ interest in Science, Mathematics and Technology in order to stimulate national development.

It will also prepare pupils for the National Science and Maths Quiz which is held at the Senior High School level across the nation.

The Archbishop opined that the competition is the materialization of a vision that would impact the foundation of Science, Mathematics and Technology education in Ghana.

The inclusion of special Science practical in the curricula of the pupils and the application of mathematical concepts will unlock their potentials and enjoin them to use the principles of science to engineer products and solve problems in our communities in the not too distant future, he averred.

Archbishop Bonaventura also encouraged individuals, civil societies, corporate organizations and the general public to play a role in nurturing this vision by actively supporting the competition at all levels.

Following his address, the Archbishop went ahead to officially launch the competition by unveiling the trophy and cutting the cake, being joined by Faustina Opoku Yeboah and other dignitaries.

In all, over 100 basic schools drawn from across the nation will compete for the ultimate trophy. The competition will be held at the regional level after which finalists will square up on the national level level.