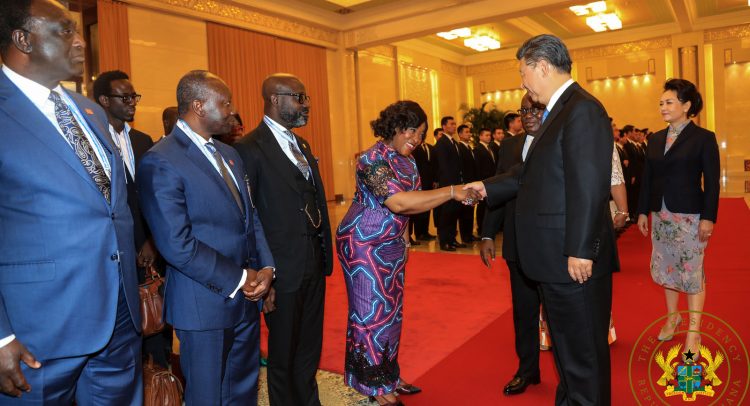 PRESIDENT of the People’s Republic of China, Xi Jinping, on Saturday handed President Akufo-Addo and his wife, Becky, a mega surprise package of their lives during an official visit to China.

Perhaps, the Chinese government wanted to make the visit an unforgettable one for their august visitor, so they gave him a surprise by welcoming him with his favourite Ghanaian song titled ‘Oye’.

The ceremony, which was fully packed with activities, was at its tail end when the Chinese security personnel, who provided music at the function, suddenly started to play the ‘Oye’ song.

Interestingly, the song seems to have become a signature tune of President Akufo-Addo lately. The music is usually played at public functions that the president attends in Ghana.

The faces of President Akufo-Addo and his delegation beamed with excitement and amazement as the Chinese security personnel perfectly played the famous Ghanaian music with their shiny-looking horns.

The Chinese security agents also played the Ghana national anthem perfectly to the admiration of the top government officials who accompanied the president.

Also, to make the president’s welcoming ceremony grand, a group of Ghanaian and Chinese children who were holding miniature flags of the two countries also put up a great show to welcome Nana Akufo-Addo and his team.

Meanwhile, the paper also gathered that the Chinese police team also played more than 20 different songs from Ghana during a lunch that President Xi Jinping organised on that same day for President Akufo-Addo and his delegation.

The Gathering Clouds In The Zu-za Camp