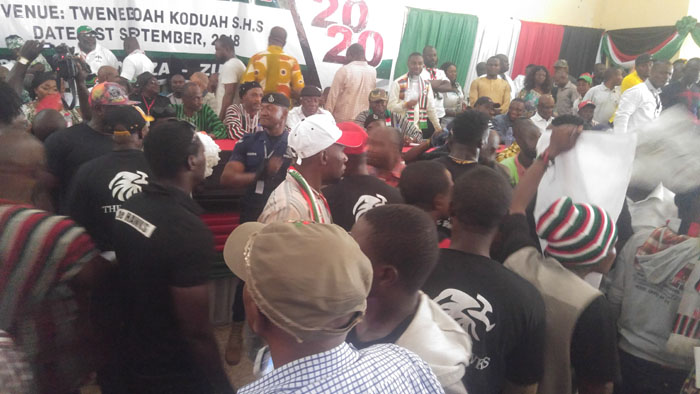 There were tears of joy for some candidates as the opposition National Democratic Congress (NDC) over the weekend held its delegates’ congress to elect regional officers to steer the affairs of the party in the next four years.

Some incumbent regional executives were shown the exit by the delegates in the crucial contest, some of which were marred by confusion.

The delegates had entered into the election on the backdrop of an advice from the founder of the party, former President Jerry John Rawlings, to reject candidates who will approach them with money in order to gain their votes.

The former president had said the time had come for the delegates to reject individuals who were interested in leading the party for their own ‘selfish interests’ and asked the delegates to listen to their constituents and elect persons with integrity who genuinely have the party at heart.

In the course of voting, a nasty spectacle ensued where the delegates were being coached to vote for particular candidates and the police had to step in to restore normalcy.

Jowak, a businessman and a former regional chairman who was staging a comeback, polled 379 votes as against 281 votes secured by Tawiah Boateng, a known Mahama boy, while another contender, Basil Ahiable, got 249 votes.

Several dramatic incidents which took place during the election such as power outage, which was interpreted to be allegedly orchestrated by the aspiring chairmen, whom some of the delegates claimed were attempting to rig the polls.

Immediately the light went out, some hoodlums believed to have been hired by the contestants rushed to the elections grounds with offensive weapons like sharp machetes to protect the ballot box and it led to the suspension of voting for a while until the lights came back before the voting which ended around 1:30 am continued.

Mark Oliver Kevor, the incumbent regional secretary, defended his position with 538 votes against 365 polled by his contender, Baba Jamal Konney, who was then the regional communication officer and wanted to move up the pecking order.

Moses Atuah Darko became the deputy organiser while Micheal Adu-Sei picked the treasurer position and Richard Lartey Obibini was elected as the deputy treasurer. Also, Darlas Ampomah E. Williams was elected as the communication officer with Akore Micheal Ofoe as his deputy while Issah Mohammed Sani secured the Zongo caucus position after beating five other contestants.

Incumbent Regional Secretary and former Regional Coordinator of the School Feeding Programme, Donatus Akamugre, was also retained, with 300 votes out of the 507 votes cast, after a challenge from his deputy and fellow teacher, Thomas Abiola, who polled 207 votes.

Madam Atukula Ophelia was elected the deputy secretary with 314 votes to beat Danka John Paul, who polled 194 votes while former regional boss of the Ghana Youth Employment and Entrepreneurial Development Authority (GYEEDA), Jonathan Abdalla Salifu lost his bid to become the regional communications officer by just one vote as he polled 254 votes to lose to Tijani Saeed Ahmed.

Abraham Lambon was elected the regional youth organizer, with Apuakasi Joseph being the first deputy and David Amoliga serving as the second deputy youth organizer.

Hajia Charity was elected the regional women organiser of the National Democratic Congress (NDC) to lead in the party’s quest to mobilise more women to support the party come 2020.

Alhaji Hudu Yahaya was voted the regional Zongo caucus coordinator of the NDC, with a clear mandate to win the Zongos back to the National Democratic Congress.

The regional executives were sworn in by First National Vice Chair of the NDC, Anita Desoso.

From the Western Region, Emmanuel Opoku reports from Sefwi Wiawso- Datano that former regional chairman Nana Toku staged a comeback to wrestle the seat from the incumbent Michael Aidoo aka Big Aidoo.

Nana Toku polled 469 votes to defeat the incumbent chairman, Big Aidoo, who had 346 of the total valid votes while the vice chairmanship position went to Kobina Jerry Kankam Darkwa, who had 258 votes, to defeat three other contenders, Musah Adamu (173), Michael Gbedemah (185) and Captain (Rtd) Anthony Cudjoe, a former mayor for Sekondi-Takoradi, who polled 189 votes.

The incumbent regional organiser Japheth Baidoo retained his position with 423 votes. He defeated Younous Mohammed, who polled 394, while Thomas Asienae was elected deputy organiser. He had 407 votes to beat Pious Kwame Nkuah (261) and Clamper Reben (150).

The communications director went to Richard Kirk Mensah with 497 votes to defeat Sam Jerome, who polled 321 votes, while Ebenezer Essien was elected deputy communications director. He polled 480 votes to defeat Kankam Owusu Yeboah, who had 338 votes. Henry Rockefeller was elected Regional NDC treasurer. He had 524 votes while his only contender, Kwasi Dick, had 294 votes while deputy treasurer went to Daniel Darlington, who secured 493 to defeat Daniel Armah, who garnered 325 votes.

The deputy women’s organizer position went to Mariam Raji, who had 25 votes to beat Elizabeth Nsaba, 18 votes, Janet Ansah and Beatrice Ofori who had 14 votes each. George Dadzie Junior was elected youth organiser with 28 votes to beat Eric Kweku Kyere (23) and Robert Kofi Agyekum (17). The Zongo Caucus position was given to Hafizu Alasco.

From the Aliu Mahama Sports Stadium in Tamale in the Northern Region, Eric Kombat reports that about 1,015 delegates participated in the election of candidates for 17 positions over the weekend.

During proceedings, there was a near clash between outgoing Regional Chairman Sofo Azorka, who is seeking another position at the national level and NDC MP for Yunyoo, Joseph Naabu.

Chief Sofo Azorka was seen angrily verbally accusing the MP for Yunyoo for attacking the personality of former President John Mahama and the outgoing chairman was prevented from leaving the grounds by some members of the party after he said asked the Yunyoo MP leave the election grounds first.

Alhaji Hassan Rufai Ahmed Veilim was elected as the vice chairman with 431 votes while the secretary went to Salisu Awurebe, who had 482 votes with deputy secretary position going to Ziblim Saaka, who obtained 535 votes.