JM And His Smash And Grab Tactics 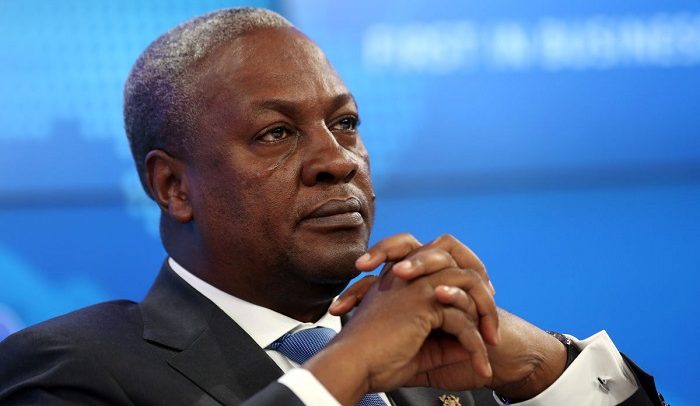 He learnt the tactics in Bole-Bamboi where he was the Member of Parliament for three consecutive terms. Anytime there was a primary to elect a candidate, he will cow every contestant into submission and made himself feel as if he was the most qualified to run.

Professors, lecturers, businessmen and women, and in fact, any one from the National Democratic Congress (NDC) in the constituency who wanted to contest him was cowed down. And so he did reign supreme until he was made the running mate to the late Professor Atta Mills. After all, was his father not a former minister in Dr. Nkrumah’s regime? How dare you challenge him!

When Prof. Mills won the 2008 presidential election, and Mr. Mahama became the Vice President, he begun to show his true colours. In no time, the meek and mild professor was relegated to the background, as Mr. Mahama took the centre stage.

He bathed himself with stinking corruption. When he was charged by President Mills to negotiate for the purchase of a presidential jet, he seized the opportunity to steal. When the good old professor learnt of his behaviour, he setup a three-member committee, to probe his VEEP.

Mahama, the master schemer worked so hard to make sure the committee never sat. Members of the committee, made up of Brigadier General Allotey (Rtd), Mr. George Amoah and Mr. William Aboah, who are still alive today kept mute, leaving Ghanaians to wallow in darkness as far as the bribe case in the acquisition of the presidential plane was concerned. Mahama smashed and grabbed millions of dollars and went free. And Mahama tells Ghanaians that we are shortsighted and forgetful.

After inheriting the presidency from the late Professor Ata Mills, Mr. Mahama set his smash and grab machinery in motion. Even before the NDC could open nomination for the presidential primaries of 2012, he made sure potential challengers were sidelined in the scheme of things.

Mr. Alban Bagbin, a potential flagbearer of the party, was denied entry to the Flagstaff House. He complained, but no one listened because it was a planned thing. Spio-Garbra, another fine gentleman was treated as if he doesn’t matter in the party.  Mahama’s boys with sharp teeth were commissioned to take the founder of the party, the late JJ Rawlings, to the cleaners on daily basis.

The Akans say when you cut off the head of a snake, the rest is a rope. So Mahama made sure Rawlings was not revered as they used to do to him. He cleverly clipped the wings of the strongman who stood between him and his ambition. Rawlings, as usual, went haywire and referred to those who were commissioned to insult him and make him look like a devil within the party he founded as greedy bastards.

My dear reader, if you are an ardent follower of things that are happening in the party, you will realize that those who played key roles in the formation of the party and also participated in the Provisional National Defence Council (PNDC) regime have been pushed aside, leaving Mahama alone and his upstarts to swim in their borrowed robes.

As for Uncle Allotey Jacobs and Koku Anyidoho, no one can blame them if they don’t have interest in the party, because they have been booted out of the party for criticising Mahama. Wofa Yaw Gyan, a cadre and a key member of the NDC has one of his legs in the NDC circle and the other pitched somewhere.

These are the guys who worked beyond human endurance to make sure Professor Mills won the 2008 presidential election. Today, they are treated like dirt by Mr. Mahama and his opportunists who were nowhere to be found when the battle was tough, and the tough kept going.  Madam Nana Konadu Agyeman-Rawlings was able to read between the lines when she threw in the towel after the Sunyani Congress.  She may be living in peace now, minding her own business.

This is a woman who did put her nose on the grindstone to support her husband in those days of the bloody revolution. She passed through fire as coups after coups were staged against her husband. When it became necessary to form the NDC, this same woman was the one who designed the umbrella as a symbol of the party.

She organised women across the length and breadth of Ghana in the name of 31st December Women Movement, and when the NDC was formed, these women became the backbone of the party. Today, she will not touch the NDC with a long stick.

Less than one year after losing the 2020 presidential election, Mr. Mahama has ignited his smash and grab war machine again. When Dr. Dufuor reared his head, it was violently pushed back to where it belongs.

Almighty Mahama is the master of all that he surveys. Any challenger? Guess what I am doing with my lips now!!!