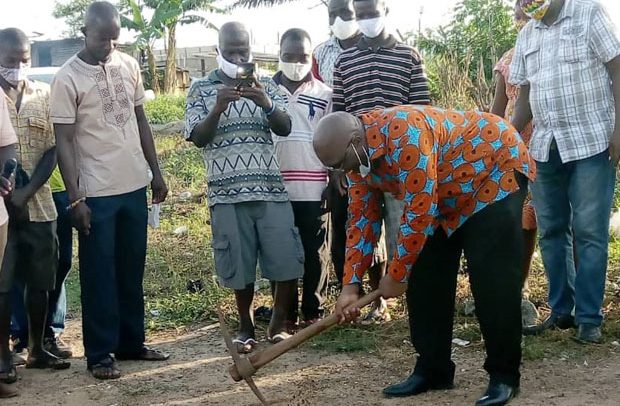 Joe Ghartey, cutting the sod for the construction of the project

The people of Anoe in the Essikado-Ketan Constituency of the Western Region will soon get a community-based health planning and service (CHPS) centre.

The Member of Parliament (MP) for the area, Joe Ghartey, on Monday cut the sod for the construction of the CHPS compound for the residents, who for many years have not enjoyed any health post.

Community health nurses in the vicinity had used an old palace in the area as a health centre but due to the deplorable nature of the structure, the health workers had to move to nearby Kojokrom to work there.

The MP was optimistic that the health centre would improve healthcare delivery in the area.

According to him, the project was expected to be completed in six months and appealed to the contractor to work within the stipulated time.

He also urged members of the area to get on board to ensure its sustainability.

He explained that some financing was being secured under his allocation of the National Health Insurance Fund to sponsor the project.

Hannah Yeboah, who is in charge of the Anoe health facility, commended the MP for the initiative, stating that such initiative was the first of its kind in the area.

She mentioned that health personnel resorted to community visits to attend to their patients since there was no health centre.

She also said teenage pregnancies and maternal health complications had become a major issue in the community and prayed the facility would be completed soon to reduce the pressure.

The MP and his entourage later inspected some ongoing projects including new classroom blocks at Ahantaman Girls’ Senior High School in the constituency and donated about 600 pieces of student desks to the school.

Angel FM Has Come To Stay