The Deputy Minister of Finance, also a Member of Parliament for Ejisu in the Ashanti Region has reroofed the leaking Onwe Government Hospital in his constituency.

The Politician took the intervention upon himself after a video went viral on social media about the leaking roofing of a hospital this year.

Whilst the social media conversations ensued, he quickly got a call from the board of the hospital confirming that the said video was the Onwe government hospital, which happens to be in his constituency.

He explained that “As a Member of Parliament, I quickly had to mobilize resources to ensure we change the roofing situation at the hospital”. 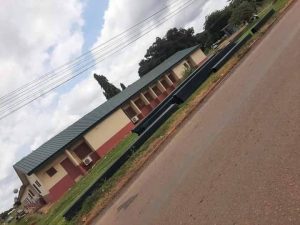 The MP for Ejisu said “I’m happy to announce that we have removed all the old roofs of the hospital and replaced them with new, modern, and long-span roofing to ensure improved and enhanced health delivery services at the hospital.

He said, in addition,” I have gotten an NGO to renovate the maternity block which is also about 90% complete. I have also lobbied for a new emergency block for the hospital scheduled to commence in January 2022″.

Mr. Kumah noted that he believes in the leadership of service, wealth creation, and progressive development plus keeping his eyes on the ball always as he strives to serve his constituents.