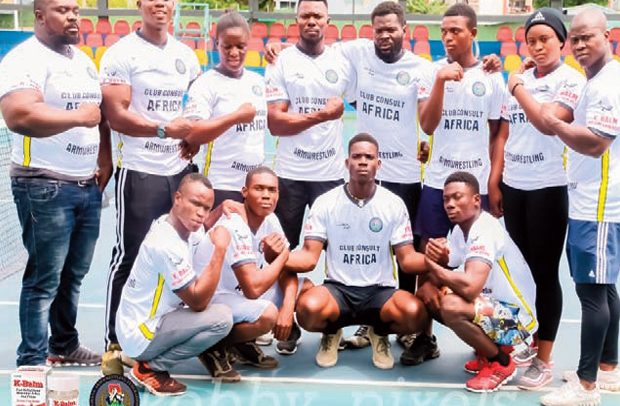 At a short ceremony held at Kofikrom Pharmacy in Accra, K-Balm offered to bear the cost of accommodation, feeding and participation for the Golden Arms in Mali, which is slated for July 11-14 at the Palais des Sports Samatiu Maigas in Bamako, under the auspices of the First Lady of Mali.

The Chief Executive Officer (CEO)of Kofikrom Pharmacy, Kofi Addo-Agyekum, underscored his company’s quest to get the youth engaged in one sport or the other to promote employment, financial independence, self-esteem and reduce crime.

“We have donated a good quantity of K-Balm to the Golden Arms to be used to massage all the athletes before, during and after the championship,” he revealed.

Mr. Addo-Agyekum thanked his friends in the business fraternity who have assisted in cash and in kind to get the Ghana Armwrestling the needed boost. He called on corporate Ghana to allocate some percentage of their budget for corporate social responsibility towards lesser financed sports.

K-Balm last sponsored Ghana when it hosted the 9th Africa Championship held in Accra and Ghana’s participation in the 2018 World Armwrestling Championships held in Turkey.

In a related development, Asky Airlines have also offered rebate on tickets for the Golden Arms for the championship, and promised same in future for any of its 22 destinations across Africa.

The President of the Ghana Armwrestling Federation (GAF), Charles Osei Asibey, and the Armwrestling Board have expressed appreciation to the Ministry of Youth and Sports (MoYS) for securing travel tickets for the team, K-Balm Ointment, Club Consult Africa, Opportunity International Savings & Loans, Ghana Revenue Authority and others for their support to enable the Golden Arm successfully participate and defend the championship title won in 2018.

He said the Golden Arms, who are currently in a residential camp in Accra, are scheduled to leave this Thursday to Bamako and hope to win at least 20 medals.

The captain of the team, Edward Asamoah of the Ghana Immigration Service (GIS), indicated that his team has prepared well for the championship and are ready to defend the country.