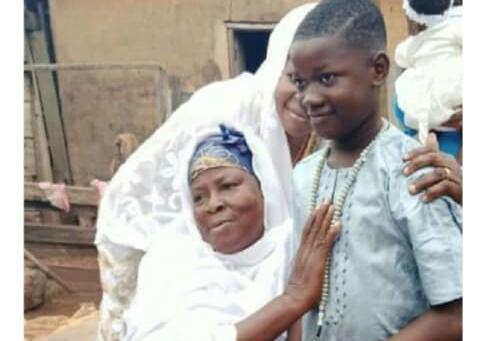 The Police on Wednesday, afternoon arrested the alleged spiritualist behind killing of 10-year old at Kasoa in the Central region.

The said spiritualist who is said to be a fetish is believed to be responsible for sending the two teenagers on a murderous duty at Kasoa Lamptey Mills.

Initially reports suggested that the spiritualist behind the teen killers was reported to be a man who from the Volta Region, but it has now emerged to be female (Fetish Priestess) identified as Nana Bisa who has her base at Amanase near Suhum in the Eastern Region.
She is believed not to be a Ghanaian who resides with her parents who are also spiritualists.

A police source told DGN Online that, the CID upon investigation picked the suspect’s contact from one of the boys’ mother phone.

The investigator pretended she needed spiritual help, leading to getting direction to the fetish priestess abode at Amanase on Wednesday afternoon.

DSP Irene Oppong, Central Regional Police spokeswoman when contacted at press time stated that “The scene of the crime where the boy was murdered falls under the Ga West Municipal Assembly hence [the] handing over to CID headquarters”.

The case docket, she also confirmed, has been handed over to the CID headquarters for continuation of the case at that level.

The alleged teenage killers on Tuesday were remanded into police custody to reappear in court on April 20 by an Ofaakor District Court.

The two, Felix Nyarko Anane and Nicholas Kini, are standing trial for their role in the murder of the 10-year old boy.

The court, presided over by Rosemond Vera Ocloo, on Tuesday, April 6, granted an appeal by the police to carry out further investigations into the matter.

The two were arrested for allegedly murdering the 10-year old boy for rituals in the Awutu Senya East Municipality of the Central Region.

The deceased, identified as Ishmael Abdallah, was found dead in an uncompleted building at Kasoa Lamptey in the same municipality.

C/R Minister Assures Justice for the Murder of 11 Years