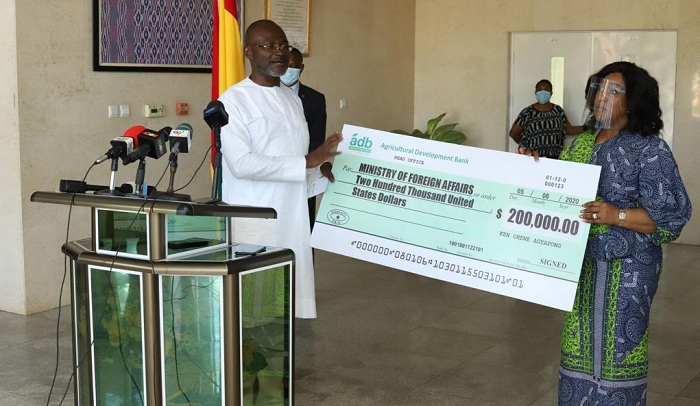 The Member of Parliament (MP) for Assin Central and owner of Kencity Media, Kennedy Ohene Agyapong, has donated $200,000 to the Ministry of Foreign Affairs and Regional Integration to aid the evacuation of stranded Ghanaians in Lebanon.

His appeal to Ghanaians has also led to the donations of GH¢501,000 and $144,650 to the Foreign Ministry towards the evacuation exercise.

The donations came on Wednesday, August 5, 2020, a day after Beirut, the capital of Lebanon, went up in flames following the explosion of a warehouse near its seaport.

The explosion reportedly resulted in the deaths of some 100 people and injured over 4,000 others.

In a statement to present donations to the ministry, Mr. Agyapong lauded the ministry for the effort it had undertaken so far in the exercise.

He said about two weeks ago, he was touched by the poor conditions under which some Ghanaians seeking greener pasture in the Middle East were living and added that the donations were a demonstration that Ghanaians are capable of handling their own affairs.

He said the $200,000 donation came from his personal resources as an MP, adding that the number of Ghanaians wishing to come back home had increased to about 1,500.

The Minister of Foreign Affairs and Regional Integration, Shirley Ayorkor Botchwey, in her remarks before receiving the money, said “in a difficult time such as this when the world is grappling with how to contain the Covid-19 pandemic and its impact on lives and economies, it is heartwarming to witness these acts of generosity, patriotism and solidarity from Ghanaians.”

According to her,
when the first case of Covid-19 was recorded in November 2019 in the Chinese city of Wuhan, nothing could have prepared the world for the devastation it would unleash on human lives and world economies months down the line.