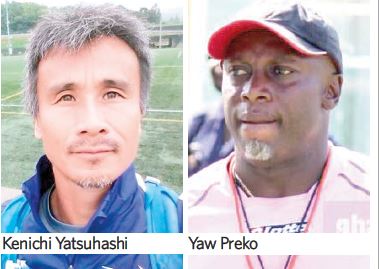 Consequently, the former Aduana Stars trainer has wished his ex-assistant well on his new role as the Wonder Club’s head coach.

On Tuesday, the capital based club announced the former Black Stars winger as its head coach; taking over from Annor Walker, who is believed to be under the weather.

Preko, together with his assistant, Godwin Attram, hit the ground at the La McDan Park few hours after the announcement on Tuesday.

Kenichi, whose association with Hearts of Oak few seasons ago stoked argument, tweeted “Hearts-era assistant coach, Yaw Preko, has been appointed coach of the Great Olympics.

“The standings will change at the end of Week 9. I am glad he returned to the scene. I wish you success!”

The relative success story of Kenichi and Preko at Hearts took the duo to work together for the Nigerian side, Ifeanyi Ubah.

The former Anderlecht man is expected to begin work this weekend when Olympics play as guests of Inter Allies.