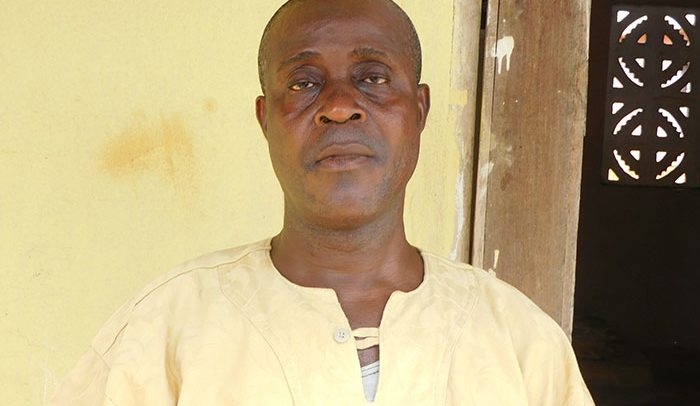 It is turning out that the two ‘killer’ fetish priests — Christian Lawoe Gameli, aka Power One, 36, and his accomplice, Famous Adukonu, aka Scorpion, 37, who have been detained for the alleged callous murder of at least two people at their shrine — were chased out of Suhum in the Eastern Region, where they were formerly practising, for a similar offence.

The fetish priests, who claim to hail from Afife in the Volta Region, were arrested on Thursday, April 30 by officials of the Criminal Investigations Department (CID) of the Ghana Police Service at Adu Kwadwo, near Adeiso in the Upper West Akim District of the Eastern Region where their shrine, ‘Power 1 Herbal & Spiritual Centre’, was located.

DAILY GUIDE’s investigations at Adu Kwadwo and the adjoining town, Kwasi Nyarko at Maame Krobo Junction, confirmed that ‘Power One’ and his accomplice moved to their present location after residents of Suhum had chased them out of the place when their nefarious activities were uncovered.

A resident of Kwasi Nyarko told DAILY GUIDE that they had learnt that ‘Power One’ was originally operating at Suhum and was chased out for similar offences.

“We have heard that he was operating at Suhum and was chased out of the place by the angry residents,” she said.

The Director General of the Criminal Investigations Department (CID) of the Ghana Police Service, COP Ken Yeboah, confirmed this revelation on Adom FM on Tuesday that the police received a call from someone that ‘Power One’ was originally operating in another town which he did not mention before relocating to Adu Kwadwo.

When DAILY GUIDE visited the area on Tuesday, the Chief of Kwasi Nyarko,  Barima Opoku Affi Nyarko, who is also the supervising chief of the adjoining towns, told DAILY GUIDE they were shocked when they heard that ‘Power One’ and his accomplice had been rounded up for killing some people and burying them behind their shrine.

“As I am speaking to you, we are still in shock because ‘Power One’ looked so innocent, very gentle and calm so nobody would have suspected him of such a crime,” he said.

The chief praised officials of CID for being able to trace and arrest the culprits.

Barima Nyarko explained that there were complaints from residents of the area for being chased by some people when they go to the farm.

He said the complaints intensified so the chiefs in the area summoned all the fetish priests to his palace to tell them about those complaints and to find out whether they had a hand in those supposed persistent harassment.

Barima Nyarko pointed out that during the meeting there were accusations and counter accusations among the fetish priests numbering about 20 in the area.

“They, therefore, agreed to gather at the market square of Kwasi Nyarko with their deities to invoke curses on the people responsible for that,” he said, adding that they could not come back to execute their promise of invoking those curses at the market square.

“We are happy that the cover of ‘Power One’ has been blown otherwise many of our people could have disappeared and we will not know who is behind it,” he said.

The chief told DAILY GUIDE that he had decided to confiscate a large tract of land bought by ‘Power One’ at Kwasi Nyarko and hand it over to the government for development.

Kwasi Nyarko’s chief, however, pleaded with the government to come to their aid by constructing toilet facility for his people, constructing speed rumps on the main Nsawam-Asamankese road which passes through the town and also erecting a telecommunication mast in the town to help boost mobile phone reception in all adjoining towns.

When DAILY GUIDE visited the shrine of ‘Power One’ at Adu Kwadwo, the place looked completely deserted with repugnant smell all over the place.

The paper met a man who only gave his name as Theophilus, whose house is located opposite the shrine of ‘Power One’.

He was sitting in front of his house with his wife, children and mother-in-law at the time of the visit. The looks on their faces were that of shock and awe, with their chins resting in their palms.

Theophilus, who was initially not prepared to speak, told DAILY GUIDE that he and his family had still not recovered from the shock of their neighbour being such a ‘callous murderer’.

Meanwhile, DAILY GUIDE discovered that residents of Adu Kwadwo were going about with their normal life and duties, with children playing about as if nothing had happened in the town.

A special police team raided the shrine last Thursday and retrieved an assortment of tell-tale exhibits including gallons of suspected human blood, an idol made from human skull, human bones, human hairs and beads in shallow graves.

The weapons were found in the room of ‘Power One’.

During a news conference on Monday, the CID boss said the police uncovered graves that contained the remains of Edward Quartey Papafio, a biochemical consultant, and Kwashie Zormelo, a mason, at the shrine.