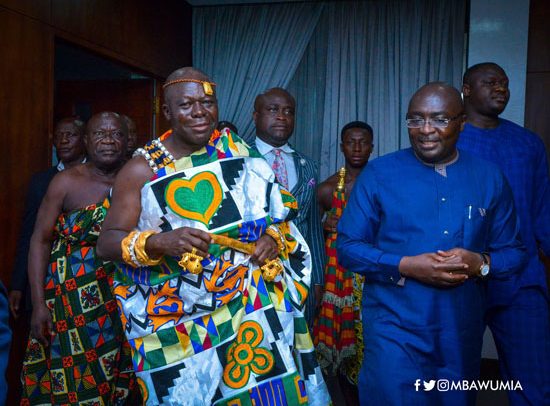 According to him, the Asante King is endowed with amazing wisdom, for which reason he (Bawumia) usually relies on him for wise counsel.

“I cherish Otumfuo’s wise advice and counsel,” the Vice-President stated on Opemsuo Radio in Kumasi yesterday when the station called him from Accra to share his views on the 70th birthday of Otumfuo.

Dr. Bawumia said, “We thank God for the life of Otumfuo. He is a wise king and we all (politicians) rely on him for his wise counsel.”

According to him, he had known Otumfuo since his (Bawumia’s) days at the Bank of Ghana and the king always displays unique wisdom, saying “the Asantehene sees things that we cannot see, and I see him as a gift from God to Ghana.”

He said the Asantehene had over the years played vital roles behind the scenes to help bring the country to its present level.

For instance, Dr. Bawumia recounted the vital roles that the Asantehene played behind the scenes before Ghana attained HIPC status some years back.

“During the tenure of former President Kufuor, I was working with the Bank of Ghana. Otumfuo’s influence helped us a lot at the time,” he reminisced.

He particularly commended Otumfuo for his vital roles in ensuring and maintaining the peace of the state, adding “we cannot develop without peace.”

According to him, ensuring the Dagbon peace process was not ‘a child’s play’ “but Otumfuo and the other eminent chiefs worked harder to achieve it for the state.”

Dr. Bawumia, therefore, entreated the public to always give the Asantehene the needed support and respect for him to continue to deliver for the country.

“We should understand that we all have one Ghana and people like Otumfuo, whose contributions make the country develop, should be supported,” he stressed.

Besides, Dr. Bawumia observed that God had blessed Otumfuo. “He looks young and healthy, and that is a clear sign that he has been blessed,” he added.