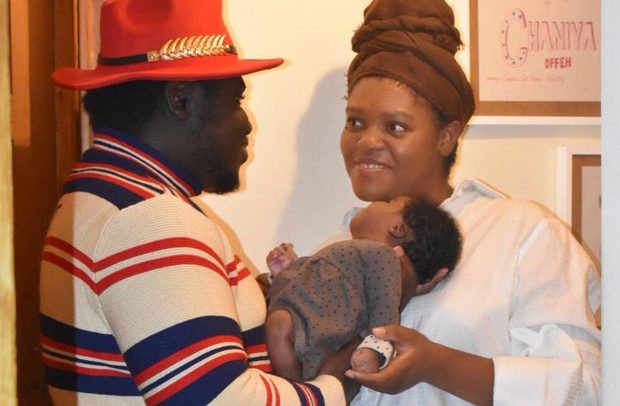 Nino with his lover and their kid

Kofi Nino, a UK-based Ghanaian opera singer, has proposed to the love of his life, Mary-Tamar, a Zimbabwean-born blogger who previously used to be called Jean Gasho, by giving her two engagement rings.

Kofi met Mary-Tamar in 2014 after his performance on BBC and BEFFTA Awards and later became lovers.

The couple have seven children together. Nino proposed to Mary-Tamar last month in August 2020 after the birth of his new daughter Chaniya, who was born on Mary-Tamar’s birthday, NEWS-ONE gathered.

The blogger took to her social media and blog to share the happy news and share her two enormous gorgeous engagement rings. The first ring she received is a rare pink diamond ring, which is estimated to be around £50,000.

The ring was slid on her finger by her husband-to-be whilst she was deeply sleeping. The second ring she got days later is an emerald-cut yellow fancy diamond ring, which is estimated to be around £150,000.

Nino was really determined to create a lasting impression with the perfect ring for her, as she has been the woman who invited him to the UK and helped him when he had nothing after they met.

“Diamonds are forever, so a great way to mark the beginning of a long-lasting relationship is with a diamond ring. And when you’re rich, the bigger the stone, the better,” Nino reportedly said.

The blogger also shared how the opera singer also presented her with the engagement gift of nine ounces of gold bars to represent their seven children and their love together which has endured over the years.