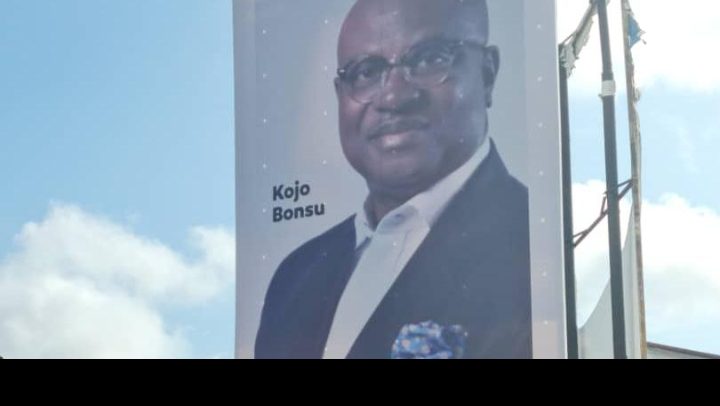 Kojo Bonsu, former Kumasi Metropolitan Chief Executive in the Ashanti Region, has hit the ground running in his bid to lead the opposition National Democratic Congress (NDC) in the 2024 presidential elections.

He has hits the campaign trail with the splashing of giant billboards across the country.

Interestingly, some of his billboards are located on areas reserve for landscaping.

The giant billboards have been mounted in portion reserved for ornamental plants.

However, the candidate thought it wise to position the billboard in that location to project his visibility as it has attracted some criticism from a section of the public.

The former Chief Executive of the Kumasi Metropolitan Assembly (KMA) had announced his interest to vie for the NDC flagbearership slot throwing his hat in the ring for the 2024 elections.

Kojo Bonsu believes that as far as contesting the polls is concerned, he is a fresh face who ought to be given an opportunity by the party.

According to him, John Mahama’s successive defeats is an obvious indication that Ghanaians would want a new candidate hence the need for the party to repose their confidence in him.

“Former President John Mahama has contested the elections twice and lost. he is known too much by Ghanaians hence the need for a new face. There’s a need for a new person to come and lead the NDC and not Mahama this time around.”
Former Finance Minister, Dr Kwabena Duffuor is also gunning for the position.

Touching on the issue in one of his tours, John Mahama said that it will be in the interest of the NDC’s democratic credentials if they get multiple candidates for their primaries.

“From next year (2022), we (NDC) will begin our branch, constituency, regional and national elections. From there we will do our flagbearership elections.

“The NDC is a democratic party so all those who show interest and qualify to contest must be allowed to do so. We must all support whoever emerges victorious into the 2024 elections, and I am certain that God will give us victory,” he said.

It is open secret that the 2020 presidential candidate of the NDC will once again contest the party’s internal primary in an effort to help them wrestle power from the New Patriotic Party. 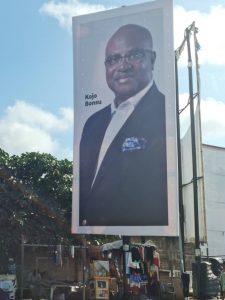 He is currently lacing his boots to try to lead the country as plans are far advanced to test the ground before officially submitting a letter to declare his intention to contest.

Other aspirants have cautioned that NDC would be doomed if Mahama is elected to lead them in 2024 general elections after suffering two electoral defeats in the history of the party.

Some have also described him as a damaged goods who cannot capture power for the main opposition party.

However, Mr. Mahama appears to have set up his machinery to 2024 with his recent attacks on the government, especially Vice President Mahamamudu Bawumia, one of the personalities tipped to lead the ruling party.

Mr. Mahama hopes of securing another term in office in 2016 after winning 2012 was dashed when he lost abysmally and humiliated by then presidential candidate of the New Patriotic Party (NPP), Nana Addo Dankwa Akufo-Addo.

The NDC candidate was once again knocked off by President Akufo-Addo in 2020 before running to court to file an election which saw his case thrown out without any merit.

I Won’t Be Cajoled To Accept Polygamy – Yul Edochie's Wife