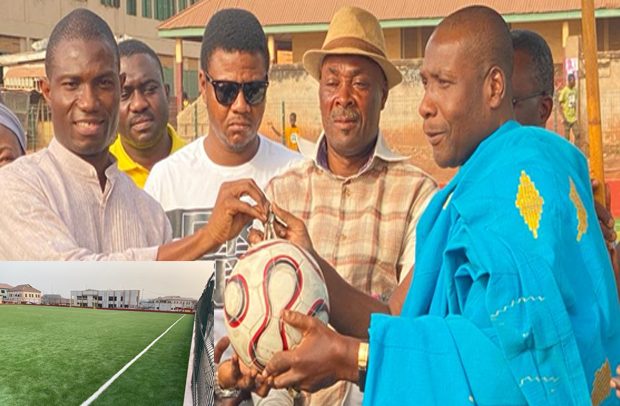 CONSTRUCTION WORKS on the ultramodern astro turf football park at the Konadu Yiadom Basic School, in the Manhyia South Constituency, have been completed.

GNPC Foundation therefore expended a whopping US$ 300,000 to ensure that the park was transformed into a modern multi-purpose facility after eight months of works.

Speaking at the Technical Handing Over ceremony of the park, the GNPC Foundation Executive Director, Dominic Eduah, lauded the contractor for a good job done.

He joyfully announced that 30 of such parks have been constructed by the GNPC Foundation across the country, adding that plans are in the pipeline to construct more.

According to Eduah, the construction of the parks is the GNPC Foundation’s contribution in helping to provide the platform for talented footballers to nurture their talents.

The GNPC Foundation boss commended the Manhyia South MP, nicknamed as ‘Napo’, for his efforts to make the Konadu Yiadom Park project a reality.

The Kokosohene, Nana Kwaku Duah, who received the park on behalf of Otumfuo, urged residents of Manhyia South to take good care of the park to ensure its longevity.

He announced that Napo has plans in advance to construct stands around the park so that football lovers would feel comfortable whenever they visit the facility.

Eddie Dankwa, the CEO of Blag Ghana Limited, the contractors for the project, lauded Napo and other stakeholders for their support, adding that the facility meets international standards.