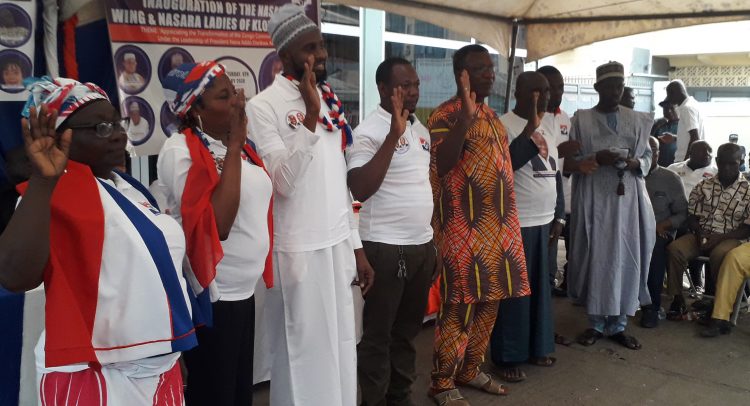 The Nasara wing of the New Patriotic Party (NPP) has inaugurated its new executive for the Klottey Korle Constituency with a vision of garnering more votes from the Muslim and Zongo communities of the constituency.

The move is part of a broader strategy of retaking the Klottey Korle Constituency seat from the National Democratic Congress (NDC) which has Zenator Rawlings as the current Member of Parliament (MP).

Other members of the executive included Seidu Fatawu as Organizer, Muazu Ibrahim as Youth Organizer, Fati Mohammed as Magajia and Maryam Adam as Deputy Magajia.

A nine member advisory board made up of Alhaji Aliyu Musah Kabe, Nuhu Usman, Shaib Mettle, Fati Mohammed, Faisal Ciessey and Atika Issah was also constituted to provide counsel to the executive.

In his remarks during the ceremony in Accra, last Saturday, the Municipal Chief Executive (MCE) of Klottey Korle Assembly, Adjei Tawiah, warned party members against complacency in the run up to the December elections.

He admonished party campaigners to not be eluded by mass turnout of party supporters at rallies and other party gatherings, but rather should stay focused on personalized campaigning and targeting of youth especially first time voters.

Prince Debrah an aspiring NPP parliamentary candidate for Klottey Korle Constituency called for love and unity of purpose among Nasara members so as to ensure the party won the seat that had been with the opposition NDC for the past three election terms.

Present at the inauguration was Brandford Kwame Daniel Adu the former MP for Okere Constituency and Juliana Aboagye the NPP Constituency Chairperson of Klottey Korle Constituency.