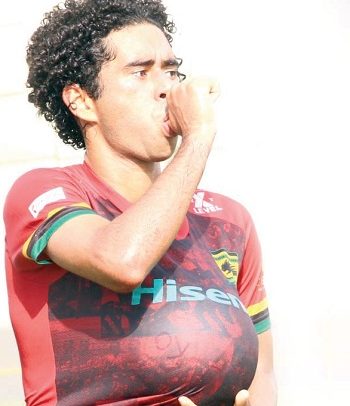 Fabio Gama scored and got an assist

Asante Kotoko yesterday posted a 4-0 win over Bechem United in their outstanding league fixture in Obuasi.

New signing Michael Vinícius Silva de Morais made an instant hit on his debut by scoring his first goal in the dying minutes by connecting home a rebound.

His Brazilian compatriot, Fabio Gama, scored the second goal before the break and dedicated it to his pregnant wife in his celebration with the ball in his shirt.

The visitors barely threatened Kotoko. It was defender Ismail Ganiu, who opened the scoring with a free-kick and Francis Andy Kumi scored his first on his full debut.

The emphatic win, Barreto’s first after drawing 1-1 against Eleven Wonders, takes them to the third position on the log, two points adrift from leaders.