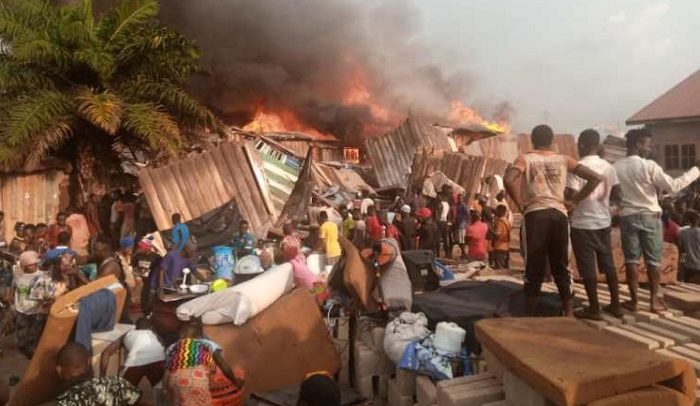 Kumasi has suffered its third fire outbreak within twenty four hours, a development which has scared residents of the Garden City.

The latest fire outbreak happened at the Dagomba Line, a popular slum, where about 500 wooden structures, providing shelter for more than 2,000 people, were gutted at 3pm on Monday.

Barely 24 hours earlier, the city had suffered two major fire outbreaks, which led to about 30 shops, in a two-storey building at the Aboabo Station, stuffed with valuable items, being damaged.

On the same day (Sunday), another fire outbreak

gutted ten metal containers  at a mini market at the Republic Hall in the Kwame Nkrumah University of Science and Technology (KNUST).

Just like the two fire outbreaks, recorded earlier in the city, the cause of the latest fire outbreak at the Dagomba Line was not immediately known, as people gave different views about the cause.

Some eyewitnesses claim it started without any warning, compelling people to flee from the scene.

Firefighters who responded to a distress call endured challenges accessing the fire scene due to the poor planning of the location.

The firefighters eventually made it to the scene and put out the fire.

Victims of the fire were mostly porters from the North and scrap dealers.

Kumasi Mayor, OseiAssibey-Antwi and other government officials in the Ashanti regional capital rushed to the fire scene to, at first hand, assess the extent of damage and the way forward.

Addressing the media, the Mayor said the rampant fire outbreaks made him to suspect foul play.

Although there were no casualties, he urged residents to report suspicious elements to the security agencies.