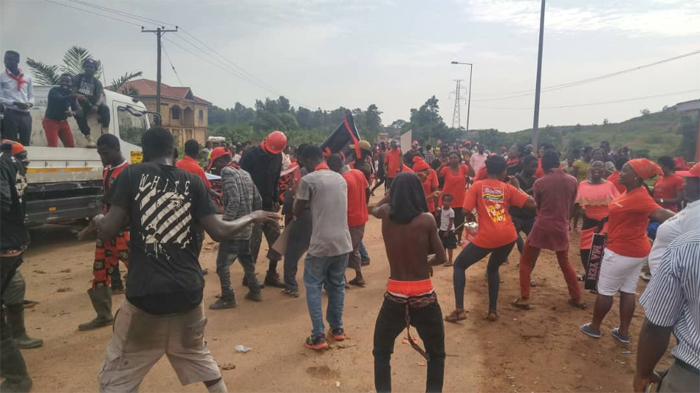 RESIDENTS AROUND the Oti landfill site have staged a demonstration against the Kumasi Metropolitan Assembly (KMA) for allegedly failing to properly manage the landfill site.

According to the residents, the poor management of the landfill has led to a pungent smell all over the community in recent time.

Waste trucks and tricycles have been lined up waiting to discharge their contents but are unable to due to the protest.

Organisers of the demonstration, led by the assembly man for the area, Elliot Ofosu Bano, have served notice that the protest would go unabated until a decisive action is taken by authorities.

They want KMA to hand over the landfill and the liquid waste treatment plant facility to the Asokwa Municipal Assembly which has jurisdiction over the Atonsu-Kuwait community.

They claimed the KMA was struggling to manage the about 1,200 metric tonnes of waste dumped daily at the landfill site, posing environmental hazards to them.

The Oti community, which is popularly known as Atonsu-Kuwait, houses the landfill site that sits on a 100-acre land surrounded by residential buildings.

Mr. Bano said the KMA had failed to fumigate the place and only did so yesterday (Sunday) upon hearing of the demonstration.

“My people are further with the flimsy excuses. We want the landfill site to be either co-managed by the Asokwa Municipal Assembly or be handed over to it complete to manage since the Oti community is no more under KMA,” he told DGN Online.