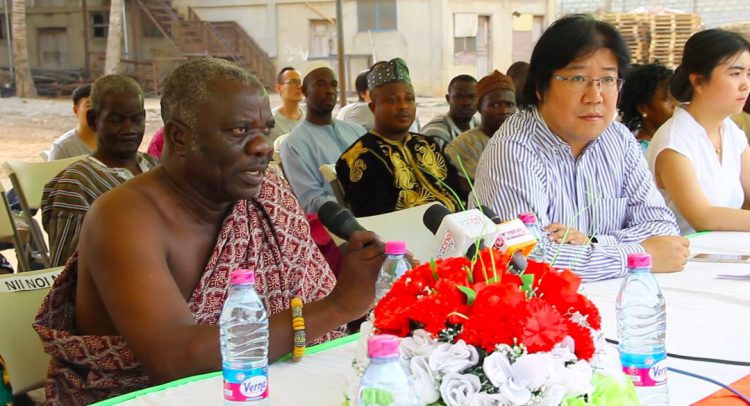 MARS DU, Managing Director of Happy Sunshine Company Limited, a tomato paste manufacturing company located in the light industrial enclave of Kuntunse in GA East Municipality, has reiterated the company’s commitment to investing in Ghana and supporting the government in its efforts to address unemployment.

According to him, Happy Sunshine was bent on boosting government’s industrialization drive and supporting its ‘One District, One Factory’ policy.

Making this known recently at a community durbar at Kuntunse, Mr Du said even though Happy Sunshine was yet to receive final approval from the Environmental Protection Agency (EPA), it had embarked on a number of reforms, including refitting the factory’s chimneys by increasing its length as required by the EPA to prevent any direct emissions into the community.

The company has also constructed a water waste management facility to properly manage liquid waste from the factory.

The EPA halted the operations of the company due to some environmental concerns and asked the company to embark on some facelift projects and also engage the community to secure their consent and support before any production could commence.

“Happy Sunshine Company Limited has since then been working hard towards meeting the requirements of the EPA,” Mr Du stated, adding that the company had acquired a tract of land directly opposite the factory to serve as customer parking space.

It also has plans to cover drainage facilities and increase the factory’s wall to check any noise pollution.

“As a community centered company known for our law abiding values, Happy Sunshine deems these reforms directed by the EPA very important for the safety of the community. Happy Sunshine believes in the local content law of Ghana and has therefore reserved about 70 percent of employment opportunities for the local people.

It is also the medium term goal of the company to train the local people to run, manage and maintain the equipment, as their Chinese counterparts transfer the technical know-how to them.”

Out of 162 respondents, who were surveyed per a directive from the EPA, 156 residents supported the continuation of the factory in their community. 143 residents had no issues with environmental pollution.

96.89 percent of residents have kindly requested the EPA to allow the company to resume operations.

Nii Noi Nortey, Chief of Kuntunse, pleaded with the government and the EPA to, as a matter of urgency, allow the company to resume operations since Happy Sunshine has addressed all environmental concerns.

He was of the view that many of the youth employed by the company have since the temporary closure of the facility been stranded, adding that that was creating a lot of economic hardship for them.

The corporate social responsibility projects earmarked include refurbishment of dilapidated school structures, provision of resources to the police to fight crime in the community and encouraging teachers and health workers to accept postings to the community, among others.

Volta Gets 13 Factories Under 1D1F