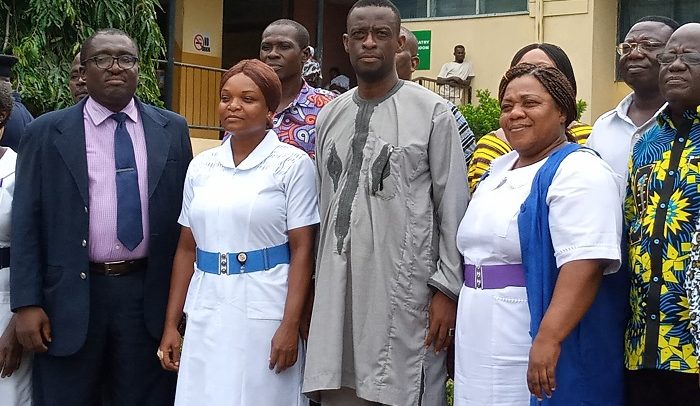 The management of the Kwesimintsim Hospital in the Effia-Kwesimintsim Municipality of the Western Region has called on the government to help save the hospital from operational difficulties it is currently going through.

The management has also appealed to the Western Regional Minister, Kwabena Okyere Darko-Mensah and the Municipal Chief Executive (MCE), Kojo Acquah, to consider the enormous contribution of the hospital in the region and support it with the requisite materials in order for it to function effectively.

Felix Osei-Kessie, administrator of the hospital, made the call when the Western regional minister and his entourage visited the facility as part of a working visit to the Effia-Kwesimintsim Municipality.

He mentioned that since the facility was upgraded from a polyclinic to a hospital, no major expansion works had been carried out. That, he revealed, had resulted in serious congestion at almost every unit of the hospital.

Mr. Osei-Kessie pointed out that the health facility has no accident and emergency block, while the pharmacy also has no stores. The newly constructed kitchen at the hospital, he mentioned, has been converted to pharmacy stores.

He added that the hospital still uses an analogue X-Ray machine, which does not augur well for the facility.

“The hospital is in dire need of a new chemistry analyzer and an additional hematology analyzer to help reduce the workload on the only one the hospital purchased,” he disclosed.

The hospital administrator pointed out that the facility has no ambulance for referral of patients and stressed that a heavy duty ultrasound scan machine should also be supplied.

“There is no single unit of accommodation for hospital staff within the catchment area of the facility. All emergency staff are accommodated far away from the hospital,” he revealed.

He said even though there has been a tremendous increase in the number of nurses at the hospital, the same could not be said of other categories of staff,includinglaboratory, pharmacy staff and prescribers.”

The two Members of Parliament (MPs) in the municipality‒ a Deputy Minister for Energy and MP for Effia, Joseph Cudjoe and the MP for Kwesimintsim, Joseph Mensah‒ all agreed to donate their share of the 275 ambulances for all the constituencies to the hospital.

Mr. Okyere Darko-Mensah appealed to the management of the health facility to use their internally generated funds judiciously, so they could take certain initiatives by themselves rather than to always rely on government for support.