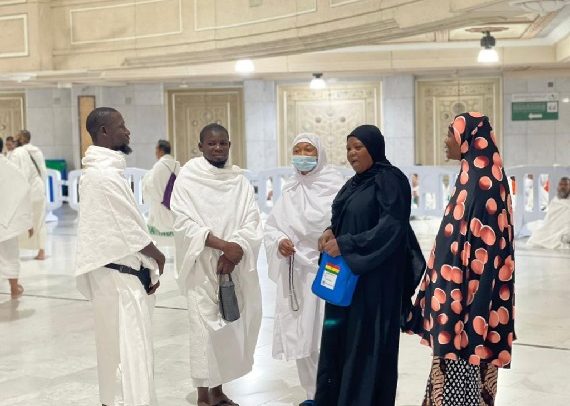 With the arrival of this set of pilgrims, the curtains have been closed over this segment of Hajj 2022.

An operation which many thought would not be feasible but for the swift intervention by Vice President Mahamudu Bawumia and the Chief of Staff Madam Akosua Opare Osei was a relief to members of the Islamic community.

The Hajj Village was a scene of tension last Saturday after some prospective pilgrims complained about the disappearance of their passports. The agitated persons raised the temperature of the Hajj Village, a situation which had police officers deployed to the location to maintain order.

Victims of the passport loss wondered why their travel documents could not be located.

Checking in procedures commenced early and lasted for several hours.

With a reduced quota by Saudi authorities and many eager to make the pilgrimage, the tension at the Hajj Village was not far-fetched.

Last two year’s quota was 6,000, which has been slashed to 3,069 by Saudi authorities who are responsible for the management of the Hajj.

Priority was given to those who paid two years ago but were unable to make it, a situation occasioned by the COVID-19 pandemic.

For two years, the annual religious activities were suspended by the Saudi authorities.

The highlight of the pilgrimage is scheduled for Friday, July 8, 2022, which is the ascension of Mount Arafat to be followed by the next day’s Eid El Adha, the festival of sacrifice of livestock.

A report received by the DAILY GUIDE states that a Ghanaian female pilgrim who is part of the Tamale airlift has passed on.

The deceased, according to the report, during prayers called for help and fell down almost immediately. She passed on while she was being rushed to a medical facility.

According a medical officer attached to the Ghanaian pilgrims, the lady appeared to have undergone medical attention earlier in Tamale before embarking upon the pilgrimage.

A group of young Ghanaian ladies have been reportedly arrested by Saudi law enforcement agents.

They are suspected of breaching Saudi immigration laws. Every year during the pilgrimage, Ghanaian women living illegally in Saudi Arabia join their compatriots from home to perform the Hajj.

Residents in Saudi Arabia must be authorised before they can perform the Hajj.

The Hajj is also a period when the incessant checking of immigration statuses of foreigners is relaxed somewhat; illegal immigrants many from West Africa are able to heave a sigh of relief during this period.

Sometimes some of the female pilgrims even flee to the Ghanaian camp to embark upon the illegal sojourning in a foreign land.

Antimicrobial Resistance: Where Did We Go Wrong In Our Efforts To Help Humanity?