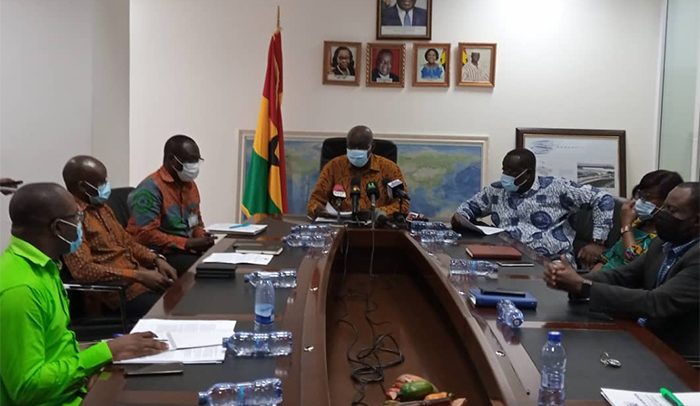 Minister of Aviation, Joseph Kofi Adda, has described allegations that he diverted the contracts for the disinfections of airports as cheap and malicious.

According to the Minister, contrary to media reports, LCB Worldwide had no contract binding on the Aviation Ministry or the Ghana Airport Company.

He says “what the agents of this cheap, malicious and unacceptable conduct have sought to do now is to shift their focus from the validity of the contract (which does not exist) to issues bordering on the safety of Ghanaians and other things that sadly fly in the face of the order of business within public sector management practice.”

The Minister was addressing the media on Thursday, May 21, 2020, after an earlier statement dismissing the claims of contract diversion.

Reports had it that Aviation Minister, Joseph Kofi Adda and Managing Director of the Ghana Airport Company Limited (GCAL) had diverted the contract that had been awarded to LCB Worldwide for the disinfection of the Kotoka International Airport, Kumasi Airport and others.

Zoomlion recently disinfected the airports in the country, paying way for the resumption of domestic flights after the lifting of the coronavirus lockdown.

But after the exercise, the Minister and the Managing Director were accused of contract diversion.

However, the Minister insist that the contract process was transparent and done in the best interest of the country and not any individual or company.

According to him, of the African nations which closed domestic flights due to coronavirus, Ghana was the first to restart operations.

“This again attests to Ghana’s leadership and successes in the aviation sector within the African continent,” he said.

He could not understand why Messrs David Kwadwo Amoateng and Nana Poku , who are the Greater Accra Regional Branch Chairman and General Secretary of the Ghana Union of Traders Association (GUTA), respectively, would still indulge in what they are doing “if not because they are being influenced by considerations best known to them.”

He wondered why LCB Worldwide has not come out to contest the matter of legitimate contract having been taken away from them.