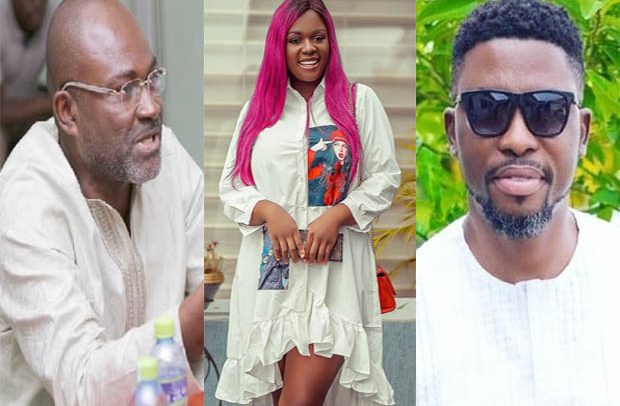 The Assin Central Member of Parliament (MP), while speaking on The Seat Show on Net2 TV on Monday evening, alleged that Mr. Mahama bought a house worth $450,000 at East Legon for Tracey Boakye and other properties because he was ‘blackmailed’ by the actress.

But he added that the flagbearer of the National Democratic Congress (NDC) cannot continue to be ‘blackmailed’ because someone like A-Plus has also slept with Tracey and was able to get away without paying her a dime after an attempt to blackmail him by the actress failed.

According to him, the timing of Tracey’s recent outburst with Mzbel is wrong and has ruined Mahama’s political efforts.

But Tracey has vehemently denied ever blackmailing Mr. Mahama and screamed at the MP to leave her alone.

She has indicated that it is not Mr. Mahama she has been referring to as ‘Papa No’ in her ‘married man brouhaha’ involving Mzbel and Gloria Kani, although Kani has said the ’Papa No’ Tracey referred to is the former President.

“Tracey Boakye, look at where the man picked you from? He helped you build a house at Kumasi with a restaurant in it…bought you a house at Lake Side Estates but you told him you don’t like (it) and he later bought you the East Legon house which is worth $450,000. I wonder what she would have done if the house was worth a million dollar… Is it how to pay him back,” Kennedy Agyapong revealed on Net2 TV.

“These are cheap cheap celebrities we have in Ghana. If you have these cheap ladies as your celebrities, then Ghana has a problem. They are cheap, always on social media. Is that the reward this man gets from you,” he continued.

He further alleged that Tracey has sent some naked pictures of the former President to someone who himself isn’t clean. He threatened to expose the journalist should the latter decide to broadcast the videos sent to him by

Mahama Wife
“One person I am worried for is Mahama’s wife (Lordina). She is a very good woman, and I admire her so much. What this girl has done is very disgusting and they go about calling themselves celebrities?

“I condemn the so-called celebrities and the way they talk. The three ladies involved in this back and forth, it’s only two of them who have been a disservice to President Mahama. Tracey Boakye should pray that NPP wins the 2020 elections else if NDC wins, she will regret it big time,” the MP said.

Kennedy Agyapong indicated that what has been happening is good to score the ruling NPP good political points, but he “won’t play to the gallery because it is so disgusting.”

“Assuming that your child is Mahama’s, what type of love do you think this little baby is going to receive from him? Immediately he sees the baby, there will be some kind of hatred for her…you’ve blown the chance of Mahama forever,” he stressed.

A-Plus Case
After Kennedy Agyapong’s statement, A-Plus shared a post on Facebook about a girlfriend he had wanted to pay in ‘instalment’.

Tracey Fires
On her side, Tracey didn’t allow Kennedy Agyapong to finish his show on Net2 TV when she also took to Facebook Live to respond to the controversial MP, warning him to leave her alone.

“Hon. Kennedy Agyapong is on Net2 insulting me over an issue I have no idea about… Please Hon. Kennedy Agyapong, I am not blackmailing anybody. What is this? Why is it that elderly men like you who can be my father are tempting me like this? Men who had sex with me and my slippers blablah you were talking about, Hon. Kennedy Agyapong in my interviews I always speak about my life story. I came from somewhere before somewhere…I am not blackmailing anybody. You said when next I do something Lordina Mahama should slap me, please don’t create problems for me. A-Plus slept with me, is A-Plus a cripple? Or am I a virgin? I am not a virgin. I have sex, I have boyfriends and I go out. Why do you go and sit on your TV and insult me?” she ‘fired’ back.

“I make good use of all my relationships; there is no way I will allow anyone to have sex with me for free. What has John Dramani Mahama done to me for me to blackmail him? Why don’t you allow him to have his peace of mind for his campaign? Don’t sit on your TV and say things you don’t know because you are Kennedy Agyapong; you don’t feed me. Leave me alone,” she added.

“I don’t have anything to do with the former President,” she stressed.

Meanwhile, Mahama’s camp has been quiet on the Tracey Boakye brouhaha.