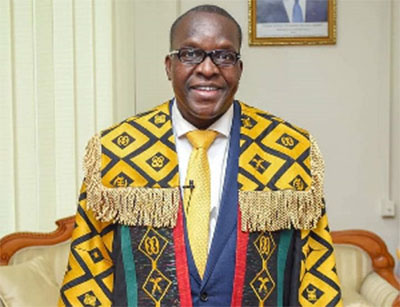 Speaker of Parliament Alban Bagbin has condemned attempts to promote lesbian, gay, bisexual, transgender, queer and intersex (LGBTQI+) activities in Ghana, describing it as worse than the COVID-19.

”LGBTQI+ plus is worse than the COVID-19 pandemic, and it must be fought by all,’ the Speaker said.

Mr Bagbin’s condemnation of the practice added to similar abhorrence expressed by President Nana Akufo-Addo, religious and traditional leaders, who have all spoken against the promotion of LGBTQI+ activities in the country.

“I am happy our beloved country Ghana is together on this. The faint-hearted would soon be strengthened to come back to join the fold,” Speaker Bagbin said.

The Speaker made the remark at the Parliament House in Accra, on Tuesday, during a Speaker’s Prayer Breakfast meeting, with a Coalition of Members of Parliament (MPs), Religious and Traditional leaders, and Civil Society Organisations against the promotion of LGBTQI+ in the country.

The objective of the coalition is to sponsor a Private Members’ Bill in Parliament to criminalize and prohibit the promotion of homosexuality in all its forms.

The meeting comes ahead of a proposed introduction of a Private Members’ Bill this week in the House by some Members of Parliament (MPs).

Mr Bagbin, quoting Biblical scriptures, stated that the world was created by God as a society for the people to enjoy, procreate and fill it, and that those who understand the Abrahamic religions know that all humans come from one stock.

Speaker Bagbin also expressed delight that as the Chair of the legislature, Ghanaians have spoken with one voice on the LGBTQI+ activities and would not compromise on their stand.

He said as a person who is pro-life, he would continue to ensure the right things are done, lives are saved and that people continue to enjoy the world as created by God.

He advised LGTBQI+ activists who were on social media threatening MPs to desist from threatening the country.

“We cannot be threatened in our homes. This must be stated, loud and clear, to those who have come to do business in Ghana and representatives of countries who think they are right. We also represent our country,” he added.

He said the foreign missions cannot dictate to Ghana on how to live or not to live in this world.

Speaker Bagbin assured Ghanaians that he was clear in his mind that the Parliament of Ghana would pass the Bill as soon as possible.

Mr Emmanuel Kwasi Bedzrah, President of the Parliamentary Fellowship and Coalition of MPs against LGBTQI+ presented a draft copy of the Bill which prohibits the promotion of LGBTQI+ to Speaker Bagbin.

Mr George, Spokesperson for the Coalition of MPs against LGBTQI+ stated that the proposed bill seeks to criminalize not just the activity but the promotion, funding of homosexuality and all its forms.

He said the Bill provides medical, psychological and other forms of support for practitioners who want to get help for their conditions and is expected to become a reference point for countries and parliaments around the world.
GNA