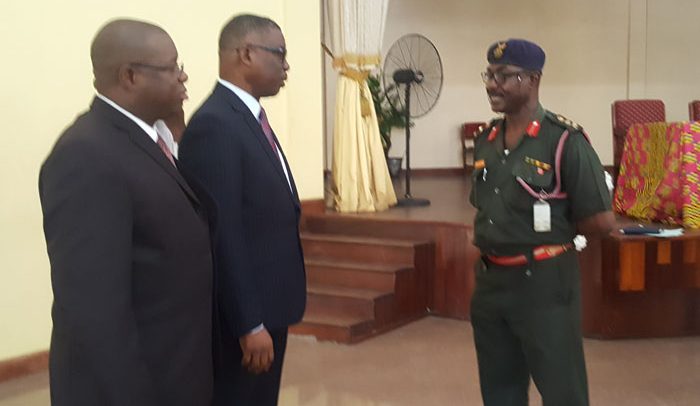 Some BoG officials in a chat with Col. Eric Quarshie after the conference at Burma Hall

PERSONS SEEKING loans from commercial banks operating in the country have been urged to request pre-agreement statement on the facility and read thoroughly before appending their signature.

Augustine Donkor, Head of Market Conduct Supervision Unit of the Bank of Ghana (BoG), who gave the advice, said most loan seekers hurriedly endorsed loan contracts without reading the agreements only to realise that they have committed themselves to agreements which they did not understand.

The pre-agreement statement, he said, was a summarized version of the loan agreement which clearly indicated the fees involved, interest rate and other processing fees.

“Many a time, customers, for lack of time, do not go through the terms and conditions associated with a loan facility and go ahead to sign for it. Later when the bank starts to deduct some unwarranted fees, they start to complain,” he said.

He said such a situation made it difficult for the BoG to assist customers since they had sealed the agreement.

Addressing personnel of the Ghana Armed Forces as part of BoG Financial Literacy Conference at Burma Hall in Accra, Mr. Donkor maintained that loan applicants should not see themselves as beggars going to beg for money from the banks.

“A loan applicant is a client who is rather going to offer the bank money and must carry themselves as big persons and endeavour to ask questions if they do not understand any clause in the facility agreement.

“If a customer has a loan which is running and would want an early settlement, per the banking laws, it is allowed and the interest should not go beyond 0.25%,” he said.

The Head of Financial Literacy Unit of BoG, Franklin Mensah, in a remark, said, “You must communicate in a language that you are comfortable with during your transactions, and it is the responsibility of the bank to get you an interpreter if they do not understand your language. If you think you have been treated unfairly by a particular bank, just make an official complaint to the Bank of Ghana and we shall take the matter up.”

He maintained that such complaints must be supported with documents if they were available.

Dr. Joseph France, Head of Financial Stability Department, added that the BoG would continue to educate customers on their rights and responsibilities in the banking hall as part of their mandate as a regulator.

He also urged Ghanaians to conduct proper investigations into any financial institution they chose to invest with in order not to be scammed.