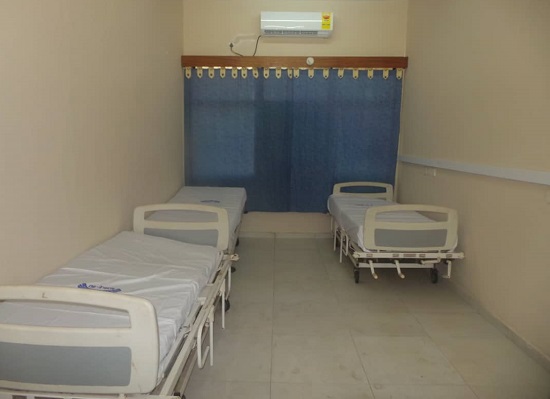 A section of the renovated sickle cell centre

Made In August, a non-profit social organisation, has renovated the male ward of the Korle-Bu Teaching Hospital’s sickle cell centre.

The organisation, which seeks to rally August borns to improve the lives of the less fortunate in the society, decided to take up the initiative after a member who was a sickle cell patient lost his life.

“This is the main reason why we chose to assist with the sickle cell facility at the Korle-Bu Teaching Hospital (KBTH) to support sickle cell patients in Ghana,” Joseph Kwesi Mensah, president of the organisation, revealed.

He said members of the organisation were shocked to realise that the male ward of the sickle cell centre of the country’s largest referral hospital was not in a good state.

Speaking at the short ceremony to hand over the facility, Mr. Mensah explained that prior to the renovation, the ward lacked basic equipment to facilitate the work of the health workers.

He added that members of the organisation believed it was not worth celebrating their birthdays until they impacted lives positively.

“We are determined to save lives and even give people better healthcare as a contribution to the country’s ailing healthcare system,” Mr. Mensah maintained.

He further stated that the health sector has been the organisation’s focus since the sector needs tremendous help.

“We believe that there’s strength in numbers and by pooling resources, we can make great impact in our society,” he added.

Made In August was formed last year with seven members. It is made up of individuals born in August with the purpose of touching lives.

The same year, the group undertook its first project to relieve poor patients of their medical bills at the KBTH, where bills of an accident patient, a lady with goitre, five new mothers and their babies were settled.

The group also supported two other patients with cash, one with leukaemia and the other with a complex medical issue.

The occasion was wrapped with a birthday celebration at the children’s ward of the hospital.