Madness: Trotro Driver Parks In Middle Of Road To Urinate 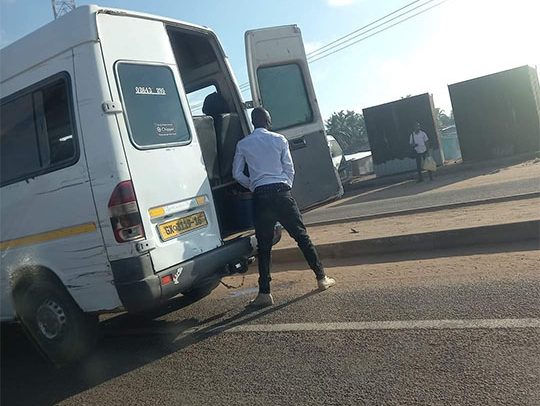 Information available to DGN Online indicates that a commercial mini bus driver has been apprehended by the Pantang Police for allegedly parking in the middle of the urinate, causing traffic in the process.

The indiscipline act which happened Monday morning October 25, 2021 got some motorists furious who drew the attention of the police and he was immediately arrested.

An eyewitness stated that “This morning at about 7:30am, a trotro driver who plies Madina-Abokobi raod, blocked traffic on the main road at Madina Reiss Junction, removed his “langalanga” to urinate on the road.

“When he was done and myself and other passengers in our taxi were reprimanding him for that indiscipline act, he attempted running his trotro into our car which caused panic.
“Unfortunately for him, there is this fine gentleman who I later got to know is a Police Officer with a name, Lance Corporal Darlington Mate-Kole of the Pantang East Police Post who got this idiot arrested.

“By the behaviour of this “insane” driver, I will repeat my calls for us as a nation to include the testing of our psychi by the DVLA when citizens apply for drivers’ licence.

“We have so many “mad” drivers on our roads like this stupid one and I think we should use this method to sanitize our roads and rake in revenue for the Mental Hospitals.

“Once again, I commend Lance Corporal Darlington Mate-Kole for the swift response”.

We Are Seeing Development In Accra - Ga Mantse

Okada For Cars Initiative Takes Off