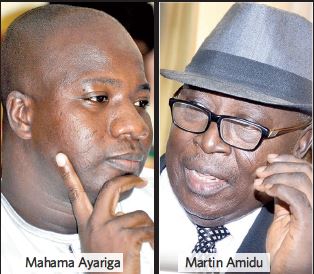 The case was filed at the registry of the Accra High Court.

The NDC MP, who has been a subject of investigations by the Office of the Special Prosecutor since last year, is facing a total of five charges.

Mr. Ayariga is alleged to have fraudulently evaded customs duties and taxes in the importation of the vehicles into the country.

The MP has also been accused of abusing his office by selling three Toyota V8 Land Cruisers meant to be used for his official duties to Kenderick Akwasi Marfo of Atlas-Rent-A-car at the price of $40,000.00 each.

The Special Prosecutor also accused the MP of dealing in foreign exchange with the agent of a supplier in Dubai for the supply of three vehicles without having the required licence.

Mr. Ayariga also faces a charge of transfer of funds from Ghana to Dubai through an unauthorized dealer.

Per the facts of the case as filed in court, Parliament, at its fifth sitting on April 7, 2017, approved agreement with Societe Generale for the purchase of vehicles for official use by the MPs by a resolution.

It said each MP was entitled to $80,000 payable within a period of four years.

It said the MPs could, however, only access the loan through a supplier, as none of them was entitled to personally collect the loan due them.

Mr. Ayariga connived with one Ahmed Tijani Abdulai, who registered a company called ASH Plantpool Limited with the sole purpose of representing the Bawku Central MP as his supplier.

Per the fact sheet, Mr. Ayariga then requested his share of the loan, which was transferred into the bank account of ASH Plantpool.

ASH Plantpool transferred $78,000 out of the amount into the personal bank account of Mr. Ayariga and kept $2,000 as commission contrary to the loan agreement.

The MP then used the money to import three Toyota Land Cruisers from Dubai.

The facts said when the vehicles arrived, Mr. Ayariga applied for a tax exemption to clear the vehicles from the port, which was granted to him on the condition that he pays an amount of GH¢36,591.15 upfront since the duties and the taxes on the vehicles exceeded his allowable tax exemption.

It said Mr. Ayariga rather paid an amount of GH¢6, 06.86 and cleared the vehicles from the Tema Port.

It added that when the vehicles were cleared from the port, the NDC MP sold them to Kenderick Kwasi Marfo at a cost of $40,000 each instead of using the vehicles for his official duties.

Watch Out! Randy Teachers In Schools