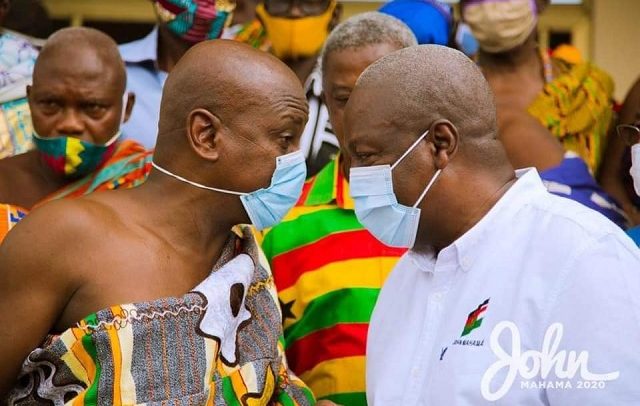 Former President John Dramani Mahama has launched a scathing attack on the leadership of the National House of Chiefs (NHC), describing it as one without a voice.

The ex-President, who is on an attacking spree of late, has been taking a swipe at judges, elections officials, security agencies, government appointees, the clergy, as well as anyone he deems to have ‘prevented’ him from returning to the presidential seat during the December 7 general election.

In what looks like pitching the current National House of Chiefs’ President, Nana Ogyeahohoo Yaw Gyebi II against his predecessor, Mr. Mahama said the House had gone mute since the end of Togbe Afede XIV’s reign in November 2020.

He described the situation as unfortunate and said the NHC, which constitutes “very prominent chiefs” across the country, ought to represent the authentic voice of the masses and speak truth to power.

The 2020 NDC flagbearer made the assertion in Ho, Volta Regional capital, when he paid a courtesy call on Togbe Afede XIV, the Agbogbomefia of the Asogli State on Monday. He was accompanied by national executives of the NDC.

The interaction session was part of the one-day “Thank You tour” of Mr. Mahama after his painful defeat in the 2020 elections in the hands of President Akufo-Addo of the ruling New Patriotic Party (NPP).

Togbe Afede became the President of the National House of Chiefs in 2016. After his first term, Togbe Afede stood for re-election in November 2020, but lost to Nana Ogyeahohoo Yaw Gyebi II, Paramount Chief of Sefwi Anhwiaso in the Western Region.

Prior to the election, the two chiefs had been on a collision course when Togbe Afede’s administration removed Ogyeahohoo from his position as the Chairman of the Governance and Development Committee of the House.

He was removed for disagreeing with what Togbe Afede said was the unanimous position of the National House on some national issues.

That notwithstanding, Mr. Mahama paid glowing tributes to Togbe Afede for being consistently frank, bold and firm on national issues when he was leading the NHC.

“We admired your frankness and boldness when you were President of the National House of Chiefs. Since you left the voice of that house on national affairs is muted. That is the truth. There are a lot of things that are going wrong in this country and the House of Chiefs is silent.”

He described traditional leaders as the last hope of the country’s discerning voice, and wondered why the NHC had been silent on the “hardships” in the country.

“Times are hard. You, the chiefs, are the ones who are at the grassroots with the people. You know the hardship that the people are going through. You must be bold and talk.” 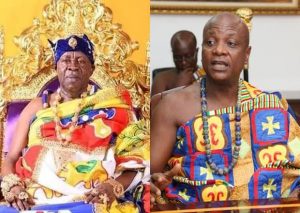 As if that was not enough, Ex-President Mahama again vented his anger on the clergy, saying that many pastors have also lost their voices on national issues for fear of intimidation by the government and its assigns.

“If all voices should be lost it should certainly not be the National House of Chiefs,” he indicated and added that the situation would have been different if Togbe Afede had won his second term bid to continue as President of the NHC.

“At a time like this, if the House has a bold leader like you (Togbe Afede), I am sure you would have drawn the government’s attention to what is going on in the country,” he stressed.

They extended an olive branch to Togbe Afede and the people of Volta Region and asked them to continuously support the NDC, intimating that the region gave the party the needed votes in the last general election.