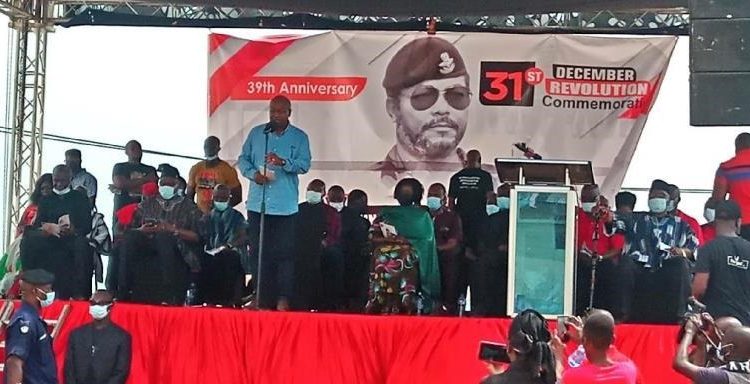 He said the NDC as a party born out of the events of the 31st December Revolution, had a duty to uphold former President Rawlings’ principles of probity and accountability, as a part of their national life and daily practice.

Other speakers at the event include Samuel Ofosu-Ampofo, the National Chairman of the NDC; Dan Abodakpi, a former Minister of Trade and Industry; Dr Benjamin Kumbuor, a former Defence Minister and Agnes Momo Lartey, Member of Parliament-elect for Krowor.

The ceremony was attended by high ranking officials of the NDC such as Professor Jane Naana Opoku-Agyemang and Edward Doe Adjaho, a former Speaker of Parliament.

Mr Mahama said the flame that the late former President lit in 1981, which continued to burn for 39 years, would burn forever.
“The revolution was not perfect, as we know every human event is never perfect. Like any human being our founder, leader of the Revolution, Chairman Rawlings, was not perfect,” he said.

“But the sum of what he did on earth, especially from the age of 33 when he burst into the political scene of Ghana and the sum events of the 31st December Revolution represent a kind of atonement for the ills of the past.”

He said the revolution therefore, bequeath to Ghanaians the principle of holding to account persons entrusted with public responsibility, since sovereignty resides with the people.

He said it was because of the drafting of constitution by ordinary Ghanaians such as butchers, dressmakers, the mechanics, teachers, farmers and fishermen; that had made the country’s supreme law the most enduring constitution in the history of Ghana.

He said the late former President, while he was alive declared that he did not want monuments and statues to be erected in his honour but rather he wanted to be remembered in the hearts of men.

“And I believe that the only vehicle; that is the best vehicle that can ensure that he is remembered in the hearts of men is the vehicle of the political Party he founded and that is the NDC. This is the reason why we must commit ourselves to the cause of Party NDC,” he said.

“I know like every human institution, we might have our disagreement but let’s have and put as a focus for all of us that protecting the revolutionary origins of our Party and the legacy of our founder is the main objective that we all want to achieve.

“And therefore, I urge that we should recommit at this 39th anniversary, that all of us will work together and that even when we have differences of opinion, we will resolve them in a way as not to endanger future of our Party,” Mr Mahama said.

He said: “And that will continue to work together as one collective (family) to ensure that the memories of those who laid down their lives for our fourth republican constitution is never extinguished.”

Mr Ofosu-Ampofo said the NDC was not a Party that burnt markets but rather it was the Party that built most markets across the country.

He noted that the Party would be declaring a three-day fasting and prayers to support their legal team, which was handling their Presidential Election petition before the Supreme Court.
GNA