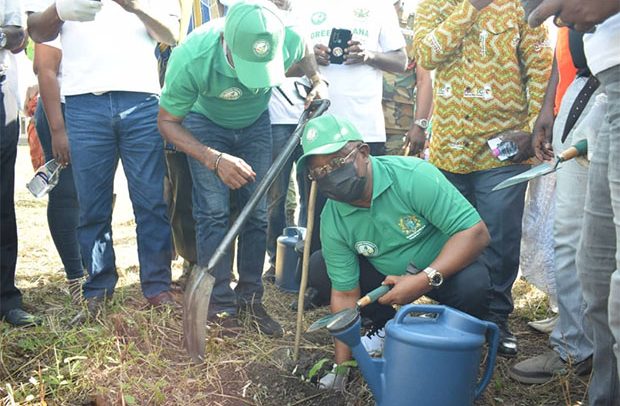 The Volta Region joined the rest of the country to plant trees to launch the much anticipated Green Ghana Project with a call not to make the exercise a nine day wonder.

According to the Volta Regional Minister, Dr. Archibald Yao Letsa it is not enough to just plant a tree on June 11, 2021 but instead make it a life time habit to protect the environment and lives; “today and that of future generations.”

Speaking at the Regional Abattoir at Sokode, he noted that the country has been noted for cutting more trees than what it planted. To this end, everyone should make it a point to nuture the trees they plant and plant more each year to reverse the trend.

He used the occassion to also appeal to electricity company and network operators to liaise with the Forestry Commission when felling or pruning trees to save their transmission lines.

He said in as much as electricity, internet and mobile network was necessity, environmental value of tree was very essential. Hence, it needed to be considered to ensure there were enough of them in the District capitals where they suffer frequent felling.

Dr Letsa commended the President for the initiative; describing it as “wonderful, transformational and a good legacy for future generations. ”

The Director of Operations, Forestry Services Division of the Forestry Commission, Edith Abruquah assured that the commission has put measures in place to ensure the exercise is sustained annually. 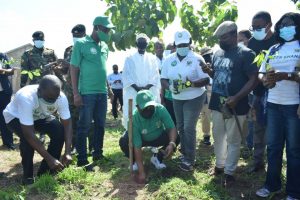 She explained that trees were planted for diverse purposes and have tangible and intangible benefits for the nation. Furthermore, with decline of the Nation’s forest cover, the Greening Ghana initiative is a masterstroke that must be supported by all.

Madam Abruquah urged Ghanaians to always consult the nearest Forestry Commission office whenever they wanted to plant trees or have any information to aid the conservation of the country’s vegetation, which is also a natural resource.

Present at the launch was the heads of the various departments and agencies including security, environmental, health, disaster management, and local government.

They all planted seedlings to mark the commencement of the exercise which is expected to realise 5 million trees, 200,000 of which would be in the Volta Region.

A delegation of Members of the Kenyan Parliament led by the High Commissioner to Ghana also took part in the exercise.

There were other similar events in all 18 Municipalities and Districts in the region with massive mobilisation of residents.